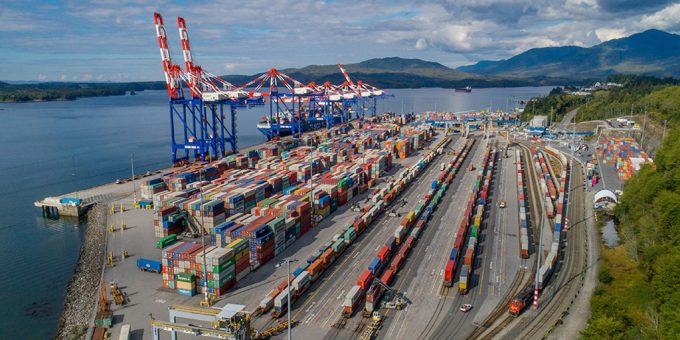 Last year was a strange one for the Canadian port of Prince Rupert.

Having clocked up rapid growth in previous years, it suffered a setback at a time when other Pacific west coast ports saw throughput climb to record volumes.

However, management is confident that this year will see “a return to strength”, with new services and expansion projects that will boost capacity as well as broaden the scope of capabilities.

Overall tonnage also dropped, by 23%, to 25,043,251 tonnes, an uncharacteristic slump, driven largely by declines in coal and grain exports. The latter was the result of a poor crop, while the drop in coal shipments was down to a large exporter shifting its traffic to Vancouver.

Shaun Stevenson, president & CEO of Prince Rupert Port Authority, attributed the reversal to two factors. Prince Rupert is mostly served in conjunction with ports in California and, with vessels on these strings stuck at the Los Angeles/Long Beach complex, carriers cancelled calls at the Canadian port.

The second factor was that Prince Rupert is chiefly an inland point intermodal (IPI) gateway to Ontario and the US midwest, and lacks transload capacity. Mr Stevenson said.

“We need to develop logistics capabilities to serve import, transload and also export activity,” he added.

Liner traffic did pick up late in the year, with new services by MSC and Cosco, but they started too close to year-end to shift the needle in the port’s annual box tally. With both operating on a weekly basis, Mr Stevenson is confident throughput is on the ascent again.

He is particularly pleased that Cosco opted for a pendulum service without adding a call in the US Pacific north-west, giving the Canadian gateway direct transpacific service both ways.

And rail service was upped a notch last year with the introduction of expedited offerings respectively to Toronto and Chicago, the result of a partnership between Cosco, DP World and CN. According to them, this provides “an unparalleled means to transport cargo at record pace”.

As the port did not suffer the volume pressures of the larger gateways further south, operations were not strained significantly.

Meanwhile, terminal capacity is on the rise. The port is halfway through the first phase of an expansion project that will raise capacity to 1.6m teu, rising to 1.8m teu with the second phase, to become the second-largest container terminal in Canada.

Mr Stevenson confirmed that progress on the project was on schedule and phase one should be completed this summer, in time for the peak season.

The project involves expansion of the container yard from 32 to 41 ha, with on-dock rail capacity increasing by 6,680 feet and the addition of rubber-tyred gantry cranes. In the second phase, the maintenance and administration buildings will be relocated to create additional container storage capacity.

The first phase also includes the expansion and relocation of the truck gate, so it can connect to a new connector corridor between the port’s Fairview and Ridley terminals to ease flows and boost capacity, both in truck and rail. The connector itself is almost ready, bar the paving, Mr Stevenson said.

And the port authority is homing-in on the next building block in its strategy. This consists of two developments: the establishment of an export logistics facility; and the creation of an export logistics set-up. The latter, which will have rail access, aims to containerise various export commodities such as grains, resins and pulp. The import facility will be on a 34-acre plot near the Fairview container terminal.

Both facilities will be fully integrated into the port’s logistics hub. The objective is the creation of an integrated intermodal system that will raise the port’s game beyond an IPI gateway.

“This is not just a competitive solution, it’s a disruptive solution to how we look to export transloads,” Mr Stevenson said. “It’s been a missing part of our service offerings and will transform us from an IPI gateway to a full-service port.”

According to the port authority, final investment decisions on both projects are expected in the spring. Mr Stevenson estimates that the work could be completed late 2024 or early 2025.