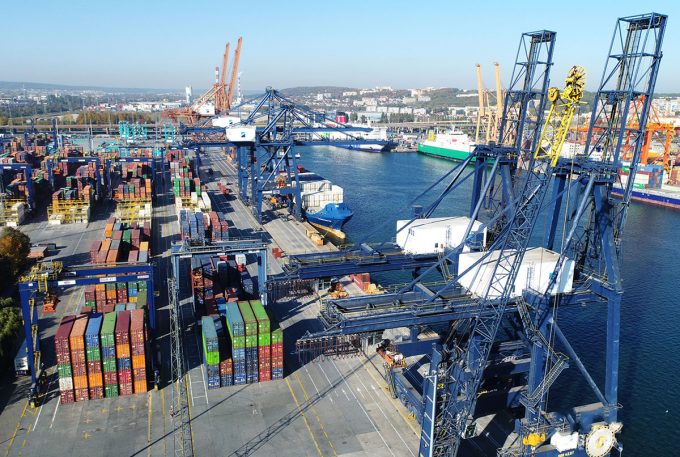 Ukrainian freight forwarders that Odessa consultancy Informall has spoken with, say Romania’s container yards are operating at capacity as a major portion of Ukrainian trade flows through Constanta.

Port of Constanta, with customs service and transport stakeholders, is still developing unified procedures to facilitate the transit of Ukrainian import containers.

Last year, Ukrainian containerised cargo turnover was more than 1m teu, but with the advent of war on 24 February and the closure of Ukraine’s ports of Odessa and Mariupol, traders have been looking for alternative routes for cargo.

As freight moved from Ukrainian ports it led to a rapid increase of containers, which has had a knock-on effect on average dwell times, now at two to three weeks. And dwell times have been aggravated by uncertainty around the necessary paperwork, adding to the growing congestion, particularly in Constanta’s terminal.

In an attempt to slow the flow of cargo into Constanta, many vessels are discharging cargo at Turkish container hubs, where boxes are then scheduled for feeder services to Constanta.

“Additionally, each shipping line provides its own instructions and individual requirements for containers destined for Ukraine which makes it even more challenging for freight forwarders working in a state of war. While containers are dwelling at Constanta container yard, vessels keep bringing more import boxes into the port,” explained Informall.

Container yards at Constanta are overflowing with cargo. Boxes are stacked six high and 20 rows wide, which has led to increased container moves and is pushing up costs to shippers and consignees. As a result, terminal handling charges at Constanta now include a new fee of €30 ($32.44) per extra lift.

These increased costs are encouraging freight forwarders to look for alternative routes for both import and export boxes. The most obvious ports are in Poland, at Gdynia and Gdansk on the Baltic Sea, with a major concern being the expedited export of Ukrainian grains.

“Transport stakeholders consider Polish ports an alternative gateway for Ukrainian ocean containers and various crops. Exports of crops are an essential part of the Ukrainian economy, as well as important for many consumers abroad,” explained Informall.

However, while Polish port capacity may look attractive, the inland connections to Ukraine, particularly rail, are challenging. Informall points to two major issues.

In the first instance, the rail network connection between Ukraine and the EU has different rail gauges. Ukrainian railways were built with a Russian gauge of 1.52m, while most of Europe uses a gauge of 1.435m. The three Baltic countries – Latvia, Lithuania and Estonia – also have Russian-built railways. However, the Baltic railway system is isolated now, as rail routes to these ports lies through Belarus, a Russian ally and sanctioned.

Moreover, a majority of the rail connections between Ukraine and Belarus have been destroyed for military and safety reasons. This means the only way to move railway equipment from Ukraine to Polish ports is via gauge-swap stations, which is a time-consuming process.

It also means there is major rail congestion at the Poland-Ukraine border. Thousands of rail wagons have jammed the gauge-swap stations located alongside the border.

The bottleneck at the borders has slowed the turnover of railway equipment, which has created the second problem – the shortage of rolling stock to maintain the required pace of export shipments.

In an effort to ease the pressure on Ukrainian rail system, Poland is looking for investors to build a dry port, combining both types of gauge at the Ukraine-Poland border. This would allow unloading of freight trains at a shorter leg, increasing the railway equipment turnover.

However, Informall believes investors would not have time to make a return on such a facility, which would have a comparatively short use time.

“Once Ukrainian sea ports are unblocked, millions of tonnes will flow via its grain terminals again. The spiked demand for rail service and warehouse space in Poland among Ukrainian exporters will roll back within a short time, making an investment unattractive for the EU investors.”

Informall said: In these unprecedented times for Ukraine, all regional transport stakeholders need time to adapt to a new reality and develop new procedures for their operations within the region. The Ukrainian war crisis has shown once again how fragile supply chains can be.

Logistics is working hard to meet the essential needs of Ukrainians

Estimates from the United Nations (UN) have put the number of Ukrainian nationals fleeing the ...