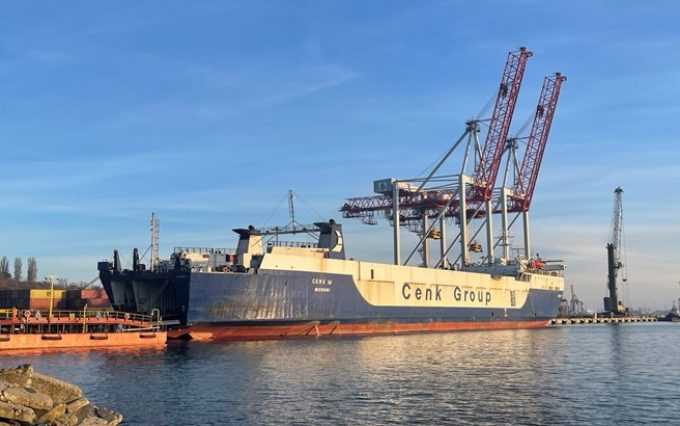 War in Ukraine has forced the re-routing of cargo out of the country, creating rapidly changing freight paths and new facilities, as companies see opportunities arise from the conflict.

A considerable part of regional Black Sea trade between Ukraine, Turkey, Romania, Bulgaria, Georgia was carried out via ro-ro shipping, which transported rail wagons as well as trucks and various other vehicles, according to Ukrainian transport consultancy Informall BG.

While Black Sea regional trade has seen ferry services come to a virtual standstill since Russia’s invasion, Informall’s analytical bureau has produced a study of the Black Sea ro-ro market, looking at how the region is now adapting.

“Our research shows that around 38,000 trucks and trailers, over 3,200 rail wagons and at least 45,000 commercial- and personal use vehicles were moved to-and-from Ukraine during 2021 alone,” said Daniil Melnychenko, data analyst. 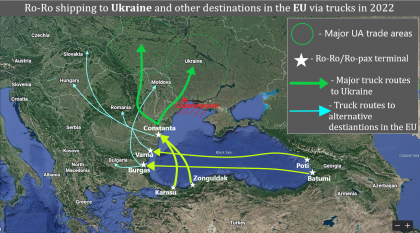 Two ferry operators carried much of this cargo, UkrFerry and Cenk Roro group, based in Turkey, both main regional operators before the war.

Turkish-owned Cenk Roro had two of its five vessels detained, following the ro-ro terminal closure in the port of Chornomorsk, just south of Odessa, which saw Cenk Car and Cenk M, a multipurpose ship, both held in the port.

Its remaining three vessels are in operation between the Black Sea and the Mediterranean.

UkrFerry, which had two ferries in Chornomorskhas also benefitted from the Grain Deal, with its ferry, Greifwald, also loading grain and was allowed to sail yesterday.

A second UkrFerrry vessel at the Ukrainian port, the Kaunas, is currently loading grain in bags before receiving clearance from Turkey to leave the port.

UkrFerry owns three ro-ro ferries, designed to transport rolling stock and trucks, which allowed UkrFerry to gain momentum for the sustainable development of the Euro-Asian block train projects known as The Middle Corridor or the trans-Caspian Route, where Chornomorsk, Ukraine, – Batumi/Poti, Georgia and the rail ferry line was operating.

“Today, Georgia is connected with Europe and Ukraine via the port of Burgas, Bulgaria, where a Bulgarian-owned ro-pax vessel Drujba operated by PB Management provides a weekly service to Batumi. Another rail/vehicle carrier Geroite Na Sevostopol, operated by the Bulgarian firm Navibulgar, regularly sails from Varna to port of Poti,” said Informall.

Meanwhile, DP World is developing its regional presence in Romania and is looking to develop multimodal routes to the west via its new facility at Aiud, west of Constanta, with road and rail links to Novi Sad in Serbia.

Emerging regional opportunities have motivated ro-ro operators to explore the Black Sea region in more detail. And that, Informall told The Loadstar, has led to “Constanta, which is located at the crossroads of the trade routes linking markets of the landlocked countries of Eastern Europe with the Caucasus, Middle East and Central Asia, to become a cargo-transit hub for all kinds of transport including ro-ro”.

At that crossroads sits DP World, which is in the process of developing a ro-ro terminal in Constanta with a view to picking up the all-important traffic from those near-east markets.

Informall suggested that “existing ro-ro terminal capacity and infrastructure [in Constanta] will not meet the needs of the operators in full”.

In June this year the port of Constanta signed a Memorandum of Understanding with DP World which will see the Dubai company develop its ro-ro terminal to handle one vessel per day, both unaccompanied and accompanied trailers. The new terminal is expected to be operational by the summer of next year.

Vassiliy Vesselovski, CEO of Informall, said: “Although, clear opportunities of successful ro-ro service set up from Turkey/Georgia to Romania/Bulgaria exist, they become less attractive for ro-ro operators once they are introduced to the service terms & conditions of the ro-ro terminal operator.”

Mr Vesselovski recognised that there is an appetite to look for ro-ro opportunities in both Bulgaria and Romania for operational purposes, such as “development of a berthing pontoon [if required], arrangement of the parking area and FPR (first rest point) requires significant CAPEX/OPEX investments from the terminal while the income remains at a rather modest level, especially for ro-pax services,” he explained.

Nevertheless, with Turkey and Ukraine having signed a trade deal on 3 February this year, just three weeks before Russia’s invasion, there is interest in this trade developing despite the war.

Informall’s study showed that agri-food products such as fruit and vegetables made up to 50% of the total ro-ro trade between Turkey and Ukraine in 2021. Around 230,000 tonnes of produce was shipped from Turkey to Ukraine in 2021, with almost all that volume carried by Cenk Roro.

Alexander Khromov, project manager at Informall, said: “Since the war began and with commercial shipping to Ukraine blocked by the Russian military these goods are now transported via land-routes at a very high cost.”

Even so the consultants at Informall believe the increasing Middle Corridor traffic from the Caucasus and Central Asian markets, transported to the EU via Georgia, means that there is growing demand for ro-ro transportation and the development of the Middle Corridor logistics. “The service sustainability via ro-ro terminals of Bulgaria and Romania might be achieved even if the direct ro-ro service to Ukraine is restored,” they noted.