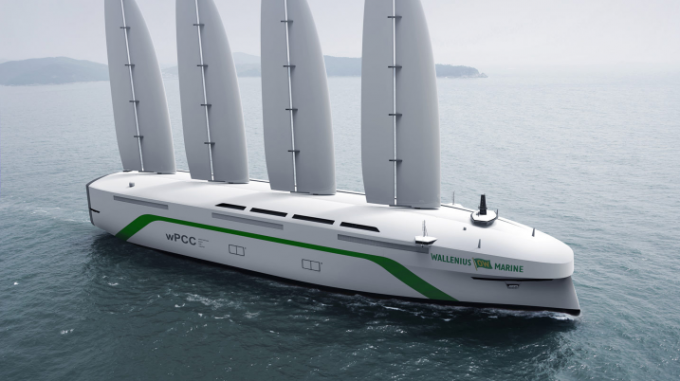 A new car carrier is set to take to the seas within four years – powered only by wind.

The Oceanbird, developed by a Swedish consortium that includes Wallenius Marine, can carry 7,000 vehicles, although it travels at lower speeds than traditional vessels.

Wallenius said the wind-powered car carrier (wPCC) design mixed aeronautic and shipbuilding technology; the sails, made of metal and a composite, will be nearly 80 metres high, twice the height of the largest sailing ships, and can be reduced for high winds to around 50m.

“It is a technically challenging project,” said the developers. “The rigging and hull will work together as a single unit to harness the wind in the most efficient way. The hull has been designed for a large sailing vessel that will transport heavy cargo over long distances for long periods of time.”

While the ship, which will be 200m long, will be fitted with engines, to be used for port manoeuvres, emissions will be reduced by 90%.

“The wPCC shows that the maritime industry can bring about major change and that zero-emission shipping is possible, using wind as the main energy source,” noted the consortium.

Estimated travel time across the Atlantic is 12 days, compared with about seven for fuel-powered car carriers.

Shipping lines will be able to order a wPCC at the end of next year.

The Oceanbird was created by a consortium comprising the KTH Centre for Naval Architecture, maritime technology developer SSPA and Wallenius Marine, while the Swedish Transport Administration has agreed funding for the project through to 2022.