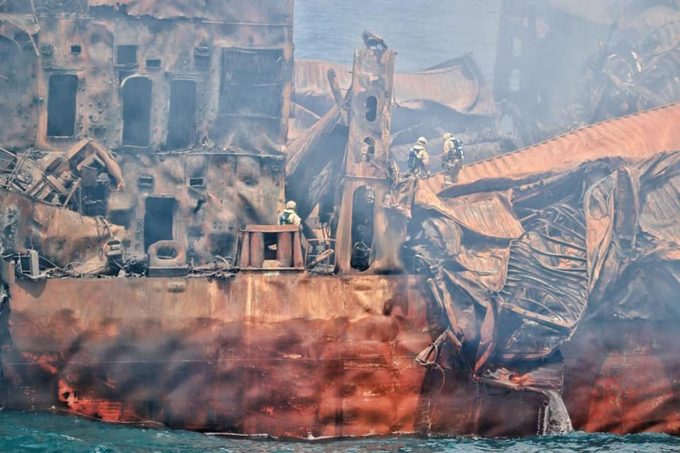 The voyage data recorder of the burned-out X-Press Pearl containership has been recovered and will form part of an investigation into how much was known about the chemical leak on the vessel.

According to information provided to the court yesterday, emails from the captain to X-Press Feeders’ local agent Sea Consortium had been deleted by the agency.

In court yesterday deputy solicitor general Madhava Tennakoon said the captain had informed Sea Consortium of the nitric acid leak via email, but the local agent had deleted the email.

The case is expected to continue on 15 June.

Meanwhile, the Sri Lankan Shippers Council (SLSC) has called for a robust and long-term solution to the incidents that have occurred regularly in or near Sri Lankan waters, following the loss of all 1,486 containers on board the X-Press Pearl after fire broke out on 20 May.

Chairman Suren Abeysekera said yesterday the role of shipping agents in Sri Lanka should be reviewed.

He added: “Considering they are representing international shipping lines in the country and [are] compensated for handling containers including transhipment, have they taken adequate proactive measures including investments made to ensure the safety of their principals’ ships and the cargo they carry as imports and exports to and from the island?

“Furthermore, what additional steps could be taken to collaborate more with authorities to upgrade infrastructure to handle modern box ship/ultra-large vessel emergencies?”

The SLSC wants a shipping and logistics policy implemented in Sri Lanka “to protect local industries from these catastrophic events”.

“SLSC has been in the forefront, providing valuable input to several drafts of such a policy document, but unfortunately Sri Lanka has failed to come up with a fair and comprehensive document to address this requirement, owing to some quarters in the industry using it as an opportunity to further personal business gains over national interests,” said Mr Abeysekera.

SLSC want to the Colombo government to implement an advanced manifest submission system for all cargo, including transhipment boxes, arriving in Colombo, before a vessel departs from origin ports. That will allow the Sri Lanka authorities time to assess the incoming goods and to prepare for any specialised cargo.

Moreover, Mr Abeysekera believes there should be a “scientific and professional approach to ascertain the colossal damage this incident caused to Sri Lankan waters/coasts”.

That assessment should be carried out by an independent body and should also involve analysing the overall effects on the country’s economy and environment before deciding on the level of compensation to claim for the incident.