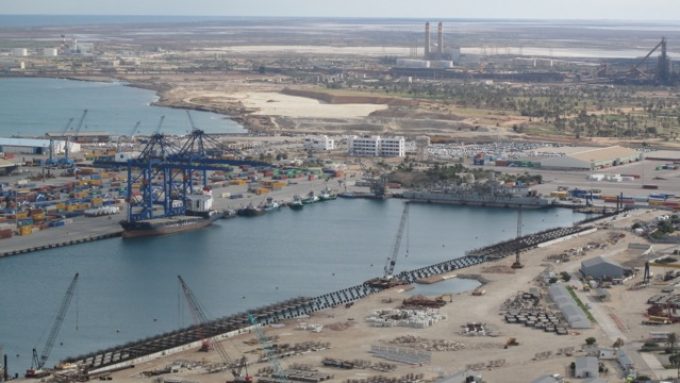 Libya’s ports are lying almost idle after dockers have moved out to the front line to fight Islamic State.

Libya’s busiest, Misrata, is home to the country’s only free-trade zone. Three years ago, the horizon was dotted with anchored cargo vessels waiting to dock, today, ships can steam straight in to unload and container throughput has dropped 33% since 2015.

“It’s a huge decrease and we are really feeling it,” Jamal El-Ghirani, general investment manager of Misrata Free Zone (MFZ), told The Loadstar.

“Every year since the revolution, things seem to have got worse,” he added.

After five years of post-revolution instability and civil conflict, Libya’s third city of Misrata is now battling the IS forces that turned the town of Sirte, 240km to the east, into its Libyan stronghold more than a year ago.

A sudden IS offensive in May, which brought the terror group within 80km of the city, forced Misrata into a bloody conflict being fought mainly by civilian volunteers.

“We are trying to defend ourselves, so we gave 100 employees paid leave to go to fight on the front line at Sirte,” Mr Ghirani said.

The MFZ was just one of a number of city businesses that gave indefinite leave to staff wishing to volunteer.

“We are using the tugboat as a warship because we are short of marine defence equipment,” said Libyan Navy commander Colonel Rida Issa. “We equipped it with heavy weapons to use as a battleship.”

He said the vessel had already supported 23 military operations in Sirte, including one where an IS ammunitions storage facility was hit with Katyusha rockets and exploded continuously for over an hour.

It is not just the presence of IS that has prompted imports to drop, but also the country’s descent into civil war since 2014. In Misrata’s free zone, only six of a former 23 international companies are still operating – Japanese carmaker Toyota and a handful of Libyan agencies.

Most international companies exercised force majeure in 2014, after the port was bombed by warplanes operating for the rival government based in east Libya under its military commander, General Khalifa Haftar.

“The material damage was very little but – we have to be realistic – it prompted a lot of companies to leave,” Mr Ghiriani said.

With the Libyan military, civilians and even IS all favouring Toyota trucks and pick-ups, the Libyan market was clearly lucrative enough for the firm to persevere, although Mr Ghirani was swift to offer assurances that the Toyotas IS use did not come through Misrata’s port.

“General Haftar was intent on damaging the city of Misrata more than anything else. He said we were supplying terrorists with weapons, but we say we are supporting revolutionaries fighting against him in Benghazi,” he said.

Such is the deep political and military divide which continues to eat away at post-revolution Libya.

The conflict was also played out at Benghazi’s port, closed for the past two years, occupied and utilised by opponents of Haftar and the scene of fierce fighting.

“A lot of imports going east come through Misrata port now, but our trucks can no longer reach the east because roads are closed or not safe,” Mr Ghirani said.

Trucks have to run a gauntlet skirting around the edge of Sirte, and then pass through Ajdabiya – the latest Libyan town where war is unfolding.

The airstrikes at Misrata port in 2014 prompted insurers to class Libya as a war zone, sending rates soaring and forcing smaller shipping agents to look at cheaper and lower risk North African markets.

Libya’s economy – steadily declining since mid-2014 – had already forced importers to cut back but, in early 2015, when the country’s central bank stopped issuing letters of credit in an attempt to curb huge corruption, importing even the most basic goods became a challenge.

This year, most imports have been limited to essential commodities – mostly food, livestock and grains – stored in the port’s 40,000-tonne capacity silos. Vehicle imports have also continued to make up a substantial percentage of incoming cargo, mostly secondhand and funded by individual buyers rather than businessmen.

For over a year, businessmen have only been able to use their own foreign currency to pay for imports. However, the Central Bank of Libya recently began issuing letters of credit to major businesses, although only after these have clambered over a range of bureaucratic hurdles intended to keep corruption in check.

Mr Ghirani described this as the first positive news for Libya’s shipping sector in months.

“We are now starting to get shipments of commodities purchased at the official dollar exchange rate via the letters of credit,” he said. “This should contribute to a decrease in market costs and lower the black market exchange rate for dollars.”

However, until the economy picks up and Libya achieves enough stability to instil more confidence in shippers and international companies, plans to develop and expand Misrata’s port and the free zone’s 4,000-metre quayside and 190ha area remain on hold.

“We want a country and we want a life. We are sick and tired of war, but we have to stop IS. We can’t let them take over,” said Mr Ghirani.

AN-124-100 said to have been destroyed in Libyan fighting

It appears the world’s stock of AN-124-100s has depleted further – images from social media ...

There are growing concerns over the risk to international shipping in the southern Mediterranean, following ...

Analysis of the armaments supply chain now employed by Islamic State, which although much of ...

No heightened threat of terror attacks on shipping in the Med – focus on migrant crisis, say experts

In the aftermath of Islamic State’s (IS) deadly attacks in Paris, attention has again turned ...

Airlines maybe moaning about the rising costs of maintenance, but spare a thought for the ...

Yesterday’s attack on a Turkish cargo ship off the Libyan coast, near a town that ...

And we think it’s hard being a haulier in the US and Europe. This fascinating ...