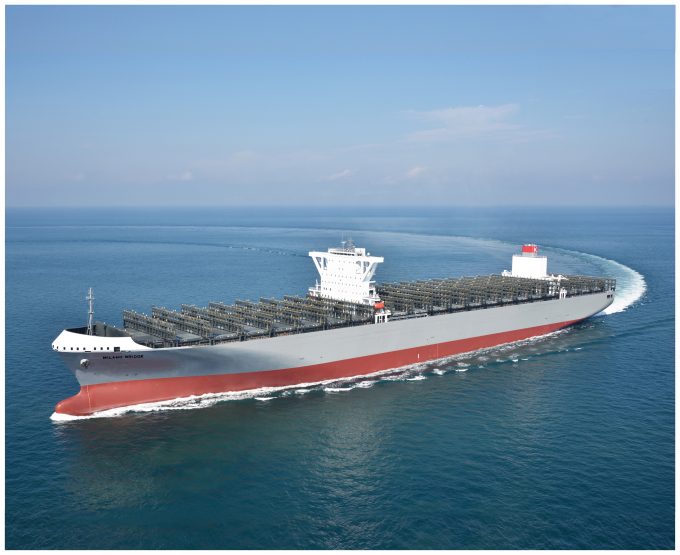 K Line has received the 13,900 teu Milano Bridge, the first of five sister ships to be delivered this year from the Hiroshima yard of Japan’s Imabari Shipbuilding.

The container businesses of three Japanese carriers will merge on 1 April, but K Line, along with MOL and NYK, will still be taking delivery of vessels ordered prior to the decision to consolidate their traffic into Ocean Network Express (ONE).

According to the orderbooks, MOL has one 20,182 teu ULCV to be delivered this year, while NYK is to receive a further seven 14,000 teu vessels – all will be added to the combined ONE fleet.

K Line said the Milano Bridge will be deployed on the Asia-Mediterranean MED2 service within THE Alliance network.

Based on this, the ONE merger will create the world’s sixth largest container line, at circa 1.5m teu, just behind the 1.55m teu of Hapag-Lloyd and ahead of Evergreen’s approximate 1.1m teu. After the newbuild deliveries, ONE will surpass Hapag-Lloyd as the German carrier says it has no plans to order more ships.

However, with a target of achieving synergy cost savings of $440m in the first year, extending to annualised savings of $1.1bn by year three, the new ONE management may need to look at rationalising the fleet at an early stage.

Given the percentage of chartered tonnage currently deployed, many of which will be on relatively short-term hire, ONE will have plenty of opportunity to cut out surplus tonnage.

Apart from their alliance membership, the Japanese carriers have hitherto operated competing services around the world. With other carriers circling their customers they will need to very quickly organise their commercial activity under the ONE brand in order not to suffer any undue customer seepage in the merger.

The history of M&A activity in liner shipping has been fraught with difficulties in retaining shipper support – in the aftermath of the takeover of P&O Nedlloyd by Maersk in 2005, the Danish carrier was estimated to have lost 50% of the acquired business.