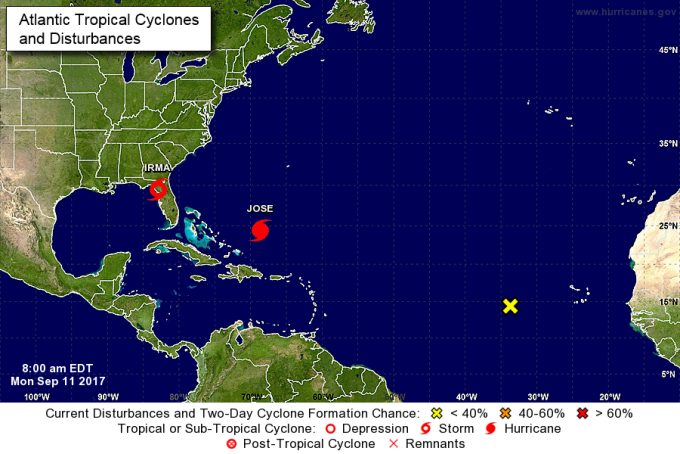 Cargo in Florida, Georgia and the Caribbean is expected to suffer delays following the devastation caused by Hurricane Irma at the weekend.

Ports and airports remain closed, rail services are restricted and ships are rearranging port calls after many containerships fled west of the Caribbean islands to sit out the storm.

Miami Airport remained closed today after being hit with 100mph winds. It tweeted it would consider reopening tomorrow, but would need to assess the damage.

DHL, FedEx, UPS and major airlines are offering limited services in an area much of which is closed today with expectations that a storm surge could bring 15ft deep flooding in some coastal places in Florida.

Ships which left Florida ports before the hurricane hit were shown to be sitting out the storm on the west side of the Caribbean islands, many of which have been devastated.

Maersk sent an advisory to customers showing the location of its ships and changes to the services. More than 50 of its vessels appear to have been impacted. Changes to operations include missed port calls and delays as ships wait for ports to reopen.

Maersk also has a regularly updated report on which services continue to operate, which also shows that rail companies are also running reduced services.

Perhaps most significant of all will be the impact on perishables.

However, the timing of the storm worked to a certain extent in growers’ favour – the oranges are still small and so are less likely to fall from the trees at this time of year. The majority of the citrus crop is insured, but farmers were trying to drain fields of excess water and ensure pumps were working before the storm hit, and it will be some time before the extent of the damage can be assessed.

However, orange juice futures and sugar prices have already gone up.

The state will no doubt be reviewing its losses in the coming days. But it seems likely that perishables traffic will be replaced by building materials and equipment as the key cargo in Florida and the Caribbean in coming weeks.

Hurricane Jose, meanwhile, hot on the heels of Irma, spared the Caribbean population from further devastation by changing tack and heading north. It is weakening and there are signs that it might blow itself out in the Atlantic.