News / Interview: Waberer's CEO on its next deal, the share price and truck driver shortage 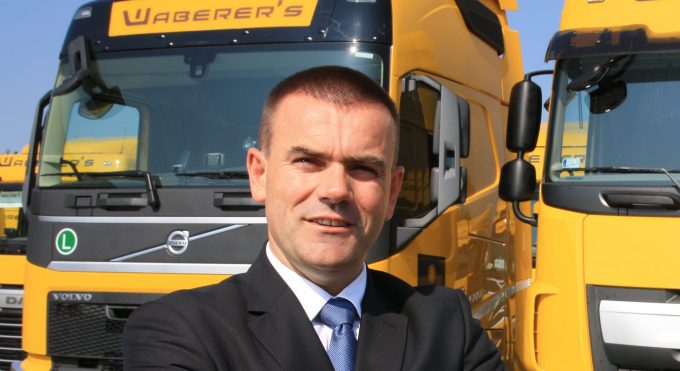 It is almost one year since its successful IPO, but Waberer’s has been under pressure since mid-March on the stock exchange.

However, its chief executive officer, Ferenc Lajkó (pictured), has downplayed the threat posed by a highly competitive environment for road transport and trucking in Europe, blaming thin trading volumes for recent weakness in the stock price, among other things.

Mr Lajkó clearly outlines to The Loadstar his company’s strategic plan and competitive advantages, explaining that Waberer’s is “financially solid and has room to chase bolt-on deals”,  while continuing to focus on efficiency and expanding its fleet.

Can you share your view about the competitive landscape where the two core units of Waberer’s operate?

Road transport is a very fragmented market with 85% of the transportation companies owning less than 10 trucks.

Depending on demand, there might be large fluctuations and seasonality in forwarded volumes. In this environment, large customers call for large and guaranteed capacity that can be provided only by a few actors who own a large fleet, and Waberer’s can ensure the desired capacity as a reliable partner with its own fleet of more than 4,300 trucks.

What’s the biggest challenge these days, in terms of organic growth?

The situation in the labour market is posing a lot of challenges to the economy, with the transportation and logistics market being significantly affected, too. There are also, typically, administrative challenges in our industry as a result of distinct regulations in the EU, which should be lessened by a unified regulation of the sector, the Mobility Package, the creation of which is in progress.

On the corporate finance side, would the group need to raise new equity to finance bolt-on deals? Do you have a size in mind? Do you think there’s room to push up net leverage, say, to 4x or higher, or is your current gross cash pile enough to chase deals?

Our debt is currently 100% related to truck leases. We are comfortable with the current net leverage of around 3x, but we would like to push it down to less than 2.5x over time. As an upper boundary, bear in mind there are covenants in the contracts with our leasing partners (3.5x).

That said, we financed our last deal using IPO proceeds last year. Whether we finance an acquisition via debt or issuing fresh equity capital mostly depends on the size of the target, and our next acquisition will probably be in the logistics segment, and might be smaller in size, which means that debt financing should suffice to finance the purchase.

Has the company identified a strategy, both domestic and international, that would allow it to preserve efficiency while boosting profitability?

We have set up a strategy that is largely based on initiatives hinging on digitisation and IT, as better IT capabilities and automatisation clearly enhance our efficiency standards. Most industry players strive on this front, but we truly believe we have a competitive advantage as we moved first, so we can be more efficient, which leads to higher margins – ie, better profitability.

As an innovative company, we also look closely at, and take part in, tests of the latest vehicle and fuel technology, and we are ready to adopt the most profitable solutions as soon as they hit the market.

Let’s talk about working capital intensity. What is the outlook for the remainder of the year after a difficult Q1?

Fundamentally, Waberer’s is a growth story and thus has a high demand for working capital. There are always fluctuations during the year, mainly due to a few larger contracts settled either on the payables or receivables side. Generally, we don’t see any reasons why the working capital strategy of the company should change significantly.

The stock has been under pressure since the turn of the year. Why is that? Also, is a trade sale or a sale to private equity the most likely option, going forward?

The performance of the company has been in line with, or above, expectations since IPO. This performance was not reflected in the share price, but trading volumes are thin, which means there is a liquidity discount priced in the stock. There was an unsuccessful attempt by our majority shareholder to sell part of its holding in March, which had a negative effect on share price.

Is the capital structure properly balanced, or do you expect a reduced amount of leverage over time? And how about core/non-core free cash for the year?

We are fine with the current capital structure, but have a long-term target to deleverage slightly, as I said. Currently, we don’t provide quantitative guidance for our future performance.

What should we expect in the next 12-18 months in terms of average numbers of trucks?

The speed of truck purchase basically depends on financing, customer demand and presence of the labour force. Although we have no driver shortage issue at the moment, finding and training is not an easy task; that’s more of a bottleneck than customer demand. Regarding financing, we have absolutely no problems. We believe we will be able to grow at the pace of what we’ve seen in the past years.

Today it was announced that Wabererʼs International has proposed that Gerard van Kesteren, an independent member who was CFO of Kuehne + Nagel for 15 years, is to become chairman. Mr van Kesteren would replace Robert Knorr, a representative of Wabererʼs Internationalʼs biggest shareholder, who is stepping down as chairman but remaining a member of the board. Mr van Kesteren said he would work closely with the other board members and management “to deliver further on our goals, which remain unchanged since the IPO, strategically, commercially and financially”.

Hungary’s Waberer’s International announced its annuals this week. Here are the key highlights, sourced from its ...

With cargo remaining 'at its core', things are looking up at Menzies

Handler John Menzies has agreed a new covenant package with its bank, giving it “additional ...

Under the radar: Waberer's on the block – value, what value?

It’s usually during the summertime that certain news slips though the net, but with Waberer’s ...

“In view of the good results, the strong resilience of the company, the stable cash ...

Over the hedge: Ups & downs in logistics as in marriage – APMM, Hapag, WTC, Danaos et al

In business and investing like in marriage, there are times when you just do things ...