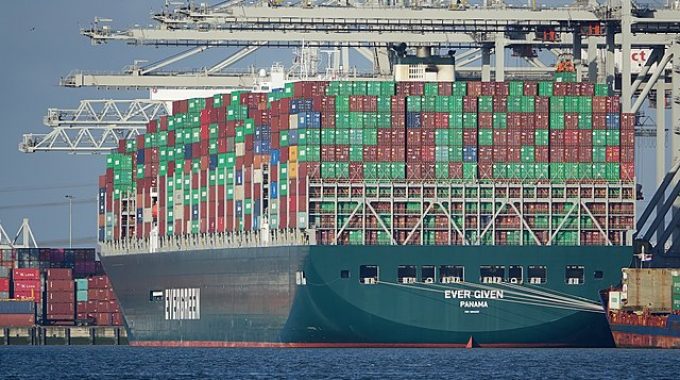 The Ever Given will return to Rotterdam, where she is pictured here in March 2020. Copyright: Kees Torn
By Alex Lennane
07/07/2021

The shipping industry has welcomed the news of the Ever Given’s departure at last from the Suez Canal to Rotterdam, where it is set to arrive next weekend.

Following a ceremony to formalise the agreement between the Egyptian authorities and shipowner Shoei Kisen Kaisha, the ship has left the Great Bitter Lake, where it has been since 29 March, for a survey at Port Said.

Japanese owner Shoei Kisen Kaisha said: “Our company has a large fleet of ships and will continue to be a regular and loyal customer of the Suez Canal. We recognise the tremendous importance of the goods carried by our vessels and we regret the impact that the voyage delay has had on those with cargo stuck onboard.

“But we can assure all cargo interests that throughout this matter every effort has been made to minimise the delay and to secure the release of the vessel as quickly as possible. We are looking forward to the vessel returning to full operations in due course.”

The International Chamber of Shipping, which played a part in the negotiations, welcomed the news – and the consequent relief for the crew.

““We are grateful for the sake of the ship’s crew that the parties have reached a successful settlement,” said Guy Platten, secretary general. “You cannot put a price on the wellbeing of seafarers.

“The Ever Given crew are now free to continue their vital role in the global supply chain and also travel home to their loved ones after three months of uncertainty.”

Pointing to the “vital role seafarers play”, he added: “The Suez incident cost $5.1bn a day in world trade, however, this was a drop in the bucket in comparison to the financial and emotional costs that the entire industry has been having to deal with due to the draconian travel restrictions imposed on seafarers by all governments.

“Now that the Ever Given issue has been successfully concluded, we must not forget the 1.5 million seafarers across the world.”

Insurer, the UK P&I Club said: “From the outset the UK club, together with the ship’s owner and other insurers, has been focused on reaching a fair and amicable settlement with the SCA that would allow the ship, her crew and her cargo to resume their voyage. After more than three months of negotiations, we are pleased that an agreement was reached.”

Thanking all the parties involved, it added: “In addition to their routine duties onboard, the crew have worked closely with the Suez Canal Authority, salvors, investigators, lawyers and countless others, and throughout it all have consistently displayed a patient professionalism that is truly admirable.”