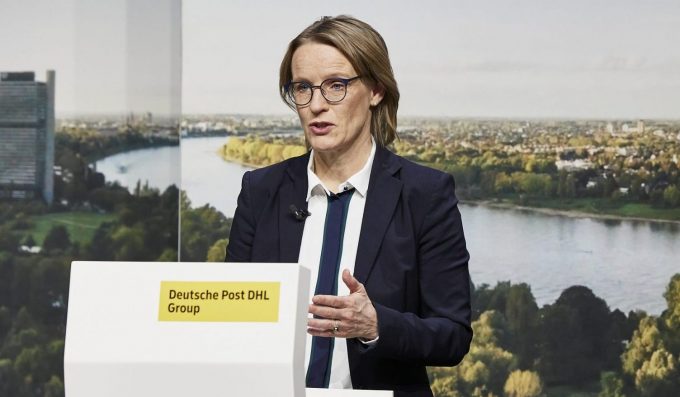 DHL’s Global Forwarding division was the shining star in what the company called a “solid” set of results – which also noted the “normalisation” of e-commerce after the pandemic-related surge. 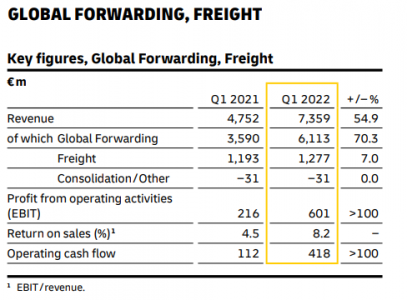 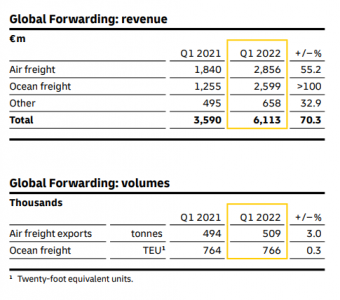 CFO Melanie Kreis (pictured above) speaking on an earnings call this morning, said she was “extremely happy”, adding: “We cleaned up our [ocean freight] portfolio. We weren’t growing, and we have now done our homework. Our visibility [platform] is really paying off.”

She added that DHL GF had benefited “from more than just good rates” – which she predicted would not normalise in the very near future – but the company was “clearly taking market share”.

Air freight volumes grew some 3%, with gross profit up 70%.

“I can’t tell you when, but there are some encouraging signs.” Yesterday, DHL started accepting shipments for east China, she added.

“China is clearly creating a bottleneck situation, and there is an expectation of a surge in volumes. It won’t be of peak season dimensions, but there is some pent-up demand in volumes, which will have an impact on the rate situation.”

Ms Kreis added that the first quarter had been “super dynamic” in express air freight. The company had had to “rejig the network” as it grappled with the ending of overflight rights over Russia.

“We also had to replace some of the aircraft we used, which were Russian carriers,” she said. “That led to an increase in costs in our air network, but it was offset… by selling off excess capacity into the forwarding market. We clearly benefit from an increase in rates, but that just compensated for aviation costs.”

She added that DHL Express had increased its emergency situation surcharge to help offset aviation costs. 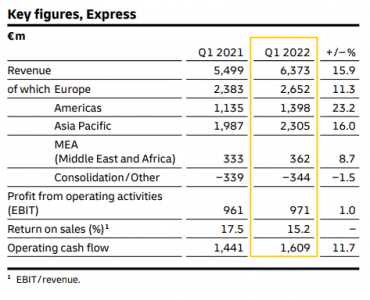 Meanwhile, DHL’s acquisition of Hillebrand, which went through towards the end of March, could be its only step into M&A in the near future, said Ms Kreis.

“Our focus is, and remains, on organic growth. But if opportunities come up that fulfil our criteria we would be open to it. There are not many fantastic opportunities coming up on a weekly basis, but Hillebrand shows what we are interested in.”

DHL noted various macro changes, which could affect its business.

Ms Kreis said: “The war in Ukraine and the subsequent sanctions against Russia have led to shortages of commodities and intermediate products, and are impeding industrial production and dampening global growth in net terms as well. At the same time, a strong rise in inflation is putting the brakes on real consumer demand.

“An additional burden are China’s extensive lockdowns at a time when most other countries have been lifting pandemic-related restrictions simultaneously. In its forecast of 15 April 2022, S & P Global Market Intelligence expects growth of 3.2 % in global economic activity in 2022 instead of the 4.2 % predicted in January.” 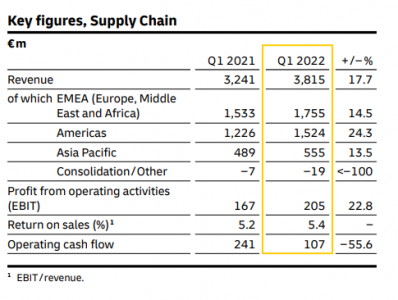 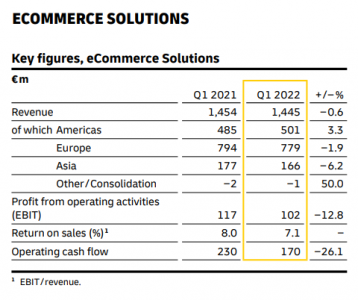 You can see DP-DHL’s full results here, and read a thorough analysis of the numbers on Loadstar Premium.