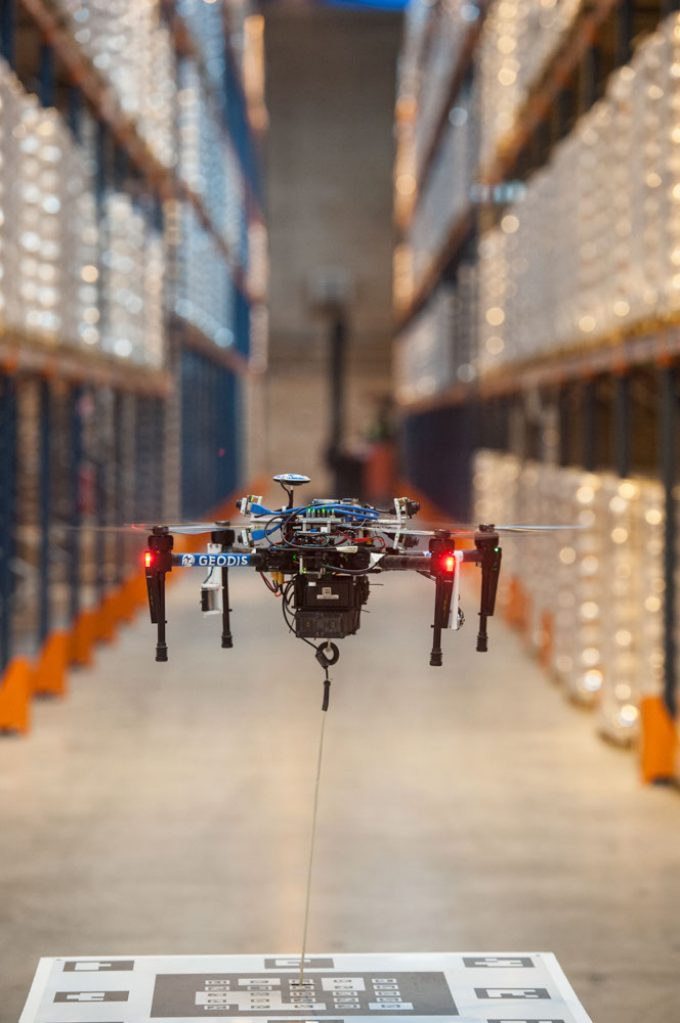 French 3PL Geodis will start using drones in its warehouses at the end of the year, the company said today.

The system combines a ground-based, battery-powered robot and a quadcopter drone equipped with four high-definition cameras, controlled by geolocation technology.

It will operate autonomously during the hours the site is closed and tests conducted during the development phase – over 1,000 flight hours in prototype were made across three pilot warehouses – show that the solution enables inventory to be managed reliably with rates close to 100%.

“The main advantages of this solution are productivity gains generated by performing the inventories outside warehouse operating hours, greater safety at work for the site’s employees who no longer have to carry out this tedious and sometimes risky task and a greater reliability of the inventory,” Geodis said.

Chief executive of supply chain consultancy Transport Intelligence John Manners-Bell told The Loadstar: “I have been sceptical about the wider use of drones in logistics, but in these sorts of controlled environments they certainly have future – it is a very interesting development.”

However, he also suggested that the development was part of wider trend of using robots for warehouse operations that could ultimately spell the end of human employment in areas as pick and pack.

“What we are likely to end up with is that humans will be taken out of that environment. Mainly because of safety – you can’t have humans and drones working in the same areas.

“So initially, there will be segregated areas which are likely to expand, although it is almost impossible to how long this process will happen because it depends on the value creation of robots. Amazon is currently the largest user of robots but it is also still hiring tens of thousands of human warehouse workers to fulfil surging demand.”

He added that the development could be seen in the context of a much wider shift in the labour markets of developed economies.

“We are already seeing a transfer of jobs from customer-facing roles in high streets to e-commerce retailers – the jobs that are lost when a company such as Toys R Us goes bankrupt are being hoovered up by Amazon; and eventually these jobs will be transferred to robots and warehouses will employ humans in other roles controlling the systems.

“This can only be a good thing for the economy, because productivity will increase, and it is a good thing for the logistics industry because in the public’s mind the sector is associated with poor working conditions and poor pay, as shown the by the Sports Direct investigation. And transforming that image will make it a much more attractive sector to work in.”

Geodis and Delta Drone are now working on producing a system that can be manufactured on an industrial scale, although initially Geodis will be the exclusive user of this solution in its own warehouses.

Supply chain radar: Geodis – the value quest... are we there yet?

Marie-Christine Lombard ought to pull the proverbial rabbit out of the SNCF hat asap.

What might be coming down the pipe in logistics M&A.