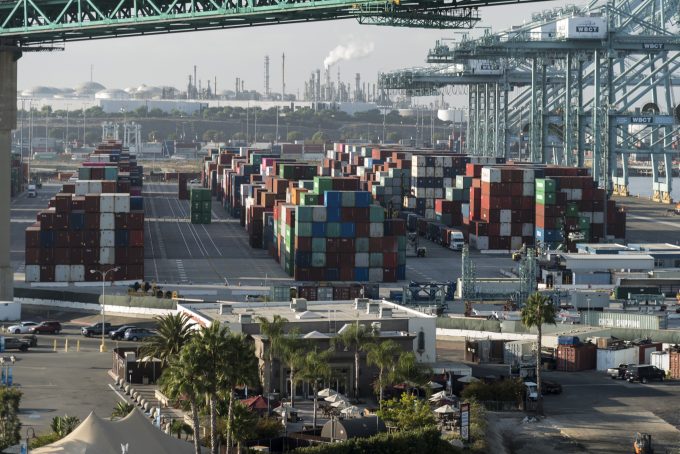 The port complex of Los Angeles and Long Beach is to receive about $840m in funding for infrastructure improvements – ironically just as throughput is down to near-record lows.

The state of California is poised to spend $1.2bn to fund port and supply chain upgrades to remedy the congestion and disruptions that hindered cargo flows through the US’s premier gateway for ocean freight.

Of the funds, 70% will go towards improvements at the ports of Los Angeles and Long Beach, with 30% for port and logistics infrastructure across the rest of California.

Governor Gavin Newsom declared: “After decades of neglect, we are finally making the critical investments needed to modernise our ports – helping us to keep up with demand in a way that is environmentally sustainable and brings our distribution process into the 21st century.”

Proposals can be submitted until 13 January, with selected projects to be announced in March.

Listen to this clip from The Loadstar Podcast of Stephen Edwards, CEO of Virginia Port Authority, talk about how to fix US supply chains and why near-to-port investments add resiliency

Being landlords, the port authorities themselves cannot do much at terminal level, like buying cranes, which limits them, more or less, to land acquisition and enhancing rail and road connectivity, noted Craig Grossgart, SVP global ocean at Seko Logistics.

“They could buy parcels of land off-dock that would allow them to expand pop-up yards, or move certain functions currently done on-dock to free-up room in container yards. They could reclaim more land for additional berths or container yard space, or they could expand on-dock rail access with additional trackage,” he suggested.

The announcement of the funding came just before cargo results for September at LA and LB, which reported numbers at both ports had slumped to their lowest levels in years. Imports through LA have not been so low in a September since the recession of 2009, while Long Beach recorded its lowest import tally for the month since 2016, down 11% on August.

They were down 7.4% year on year, following a 10.9% annual retreat in August. Total throughput year on year was down 0.9%, while LA suffered a 15% slump in imports, which translated into a year-on-year drop of 21.5%. August imports had already contracted by 16.7% from July.

The declines have been attributed to a combination of factors, including the fact that importers brought in merchandise for the holiday season earlier than last year to beat the congestion.

“September is traditionally a high-volume month for end-of-year products,” said Gene Seroka, executive director of the port of Los Angeles. “Think toys and games, clothing, footwear and other products. Those holiday gift items dropped precipitously compared with last September, mainly because they came in earlier. This year our peak season was in June and July, as savvy importers moved up the arrival of these goods to bring some certainty back to when they could get to market.”

Slowing global trade and inflation are also taking a toll on traffic also affected by beneficial cargo owners’ concerns about ongoing contract negotiations between west coast employers and port labour, which on past occasions led to work stoppages that paralysed cargo flows. As long as the current round of negotiations is not complete, shippers will continue to route their imports over gateways on the east coast and ports on the Gulf of Mexico, said Mr Saroka.

And he does not anticipate a rebound this month, adding: “October is going to be soft.”

The slowdown in imports has reduced the vessel congestion that had plagued the port complex since last year. By mid-week, there were just four ships waiting for berth space – down from a high of 109 vessels in January.

Terminal congestion is still a problem, though. According to Mr Seroka, street dwell times for chassis are 10 days, they should average four.

And despite the drop in traffic, LA is still on track to see its second-busiest year on record.

It remains to be seen how far importers will continue to use gateways in the east and south-east for traffic from Asia, but congestion at New York/New Jersey, Savannah and Houston suggests a considerable portion of their imports will return to the west coast when current issues are resolved.

So measures to beef up capacity at LA and Long Beach will be welcome.