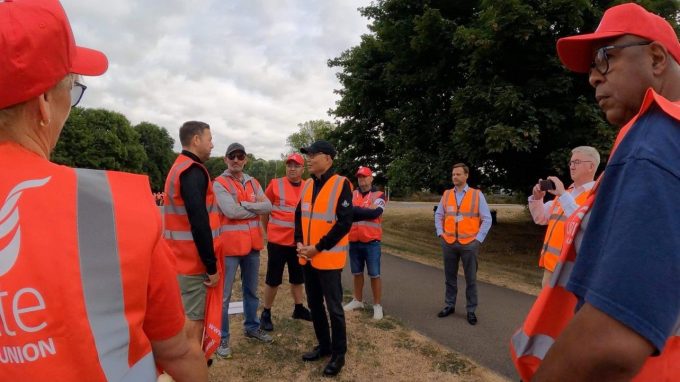 Claim and counter-claim are being thrown around in the Felixstowe pay dispute, ahead of next week’s second strike.

Felixstowe CEO Clemence Cheng is accusing the union of intimidating staff that want to work, while the union countered that staff at the port had filmed pickets.

In what is turning into a bitter dispute, Mr Cheng wrote to staff on 14 September urging them to “think carefully about what you personally hope to achieve by going on strike” adding, “think of your future, the future of the port and the local community when making your decision”.

Mr Cheng followed-up the letter by yesterday telling the East Anglian Daily Times: “Our employees are telling us they do not wish to strike, but are afraid of intimidation if they turn up for work on strike days. In a modern democratic society this is totally unacceptable. Everyone has a right to strike, but also has a right to work if they choose to.”

But Unite regional secretary Peter Kavanagh cautioned the company that all staff enjoyed protection from the law when participating in lawful industrial action, adding: “Any attempt by the company to subject our members to any detriment for taking part in lawful strike action will be met with a firm legal response from Unite.”

Another union official at Felixstowe, Miles Hubbard, told The Loadstar Mr Cheng was making “unsubstantiated claims” in a bid to discredit the union and its members.

He added: “If there has been intimidation, what was it, what happened?” He said the CEO had “made these claims without a shred of evidence”.

According to Mr Hubbard, the port company had sent a letter to employees on the first day of the August strike, which The Loadstar has seen, telling them: “The Union stewards have also maintained a peaceful and civil presence outside the terminal”.

Nevertheless, Mr Cheng was seen asking pickets for their names and checking if they worked at Felixstowe – an attempt to discredit the union, he claimed.

Moreover, Mr Hubbard said, finance director, Simon Mullett, was also seen filming lawful protesters on the first day in what he claimed was an attempt by the company to intimidate striking dockers.

There had been rumours that on Tuesday an agreement had been reached for an 8% pay deal, backdated to January, with no one-off payment of £500 and with equal bonuses for all workers.  According to sources, that deal had collapsed because Hutchison refused to drop disciplinary charges against five members of the union reportedly accused of intimidation of workers that crossed picket lines.

One of those five was reportedly suspended for intimidating strike breakers by filming them as they entered the port.

Mr Hubbard refused to discuss the disciplinary action, because these were live cases, but said the rumours of a deal were “rubbish”. He added: “Hutchison Ports has refused to negotiate at all.”

Mr Hubbard believes that Hutchison is instead spreading disinformation in the hope of disrupting the strike.

The Loadstar contacted Hutchison Ports, but a spokesman said the company had “nothing to add”.