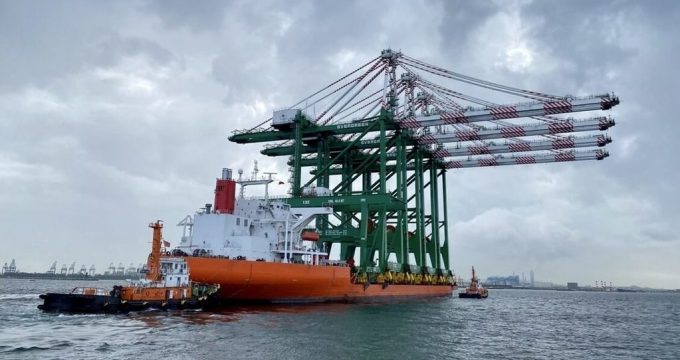 Evergreen has spent over $333m on 19 remote-controlled bridge cranes and 56 gantry cranes for the opening of the No 7 terminal in Taiwan’s main container port, Kaohsiung.

Set to open next May, with a 2.4 km berth and 18-metre deep water, the facility on reclaimed land can accommodate five 24,000 teu containerships simultaneously, enabling it to handle around 4.5m teu a year.

Evergreen, Taiwan’s largest container carrier, signed a long-term lease with Taiwan International Ports Corp for the No 7 terminal in 2018, but flat throughput growth reportedly delayed its development. Kaohsiung, which had an all-time high handling record of 10.59m teu in 2014, processed 9.86m teu in 2021.

The large-scale investment in machinery and equipment indicates that Evergreen will continue to develop Kaohsiung as a transhipment base in East Asia.

On 22 June, construction of the first phase of No 7’s S5 and S3B terminals and some of the backfield sites was officially completed and handed over to Evergreen, which will use these areas for pre-operational preparation, such as equipment relocation.

Once No 7 is ready, Evergreen, the world’s sixth-largest liner operator, will shift its Kaohsiung operations there from the No 5 terminal, which it also operates, and No 5’s lease will be taken over by compatriot liner operator Wan Hai Lines.