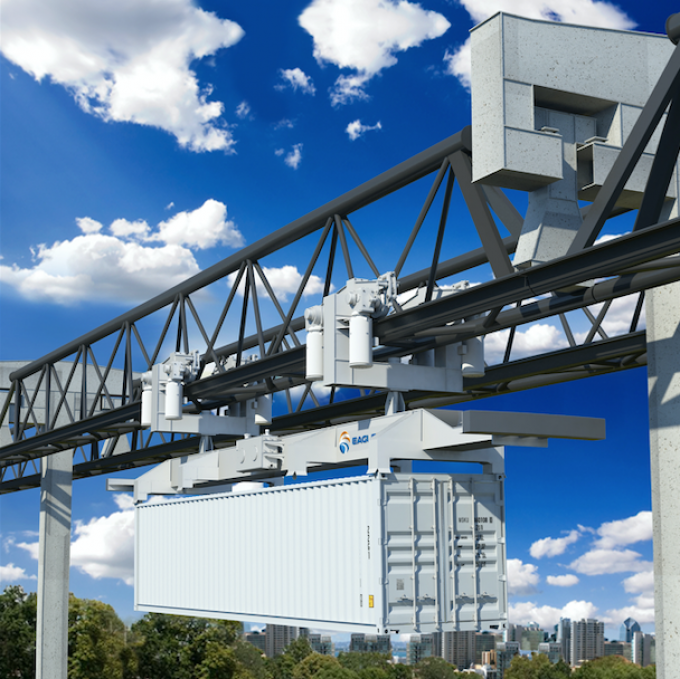 Ever-increasing trade volumes are causing strains in the global supply chain, with levels of road congestion reaching extremes in some places. But one company believes it may have a solution.

“The idea arose while in Brazil, and how it could be adapted to European intermodal standards – not by expanding ports, but by improving connectivity,” Mr Wychocki told The Loadstar.

“And because of the terrain, overhead rails up the mountains could move containers to these depots away from the port without needing to use the road.”

The system is something akin to a ski lift, but carrying containers rather than people, and it is not limited to mountain sides. Boxes are transported by eight electric motors carrying it along the overhead rail at around 20mph, which the company said would allow 75 to 80 container movements per hour.

“Of course, the numbers that can be moved increases or decreases depending on the number of lanes operating – 75 to 80 is based on a two-lane system,” continued Mr Wychocki.

“Two things that make our system interesting is that it is based on pre-existing equipment, which we are simply bolting together and this makes it easy to build and maintain.”

As it stands, no Eagle Rail corridors are up and running as yet but Mr Wychocki said that the company has spoken to 42 ports across 17 countries, with hopes of a first customer by year-end.

Brazil is expected to be the first customer – Mr Wychocki said a verbal agreement exists – with Bangladesh close and China, India, South Africa and the US appearing keen.

“We think Brazil will sign up for a pilot by the end of the year, and from there we would be looking to run a pilot during 2020,” he said.

“Following this one pilot, we think that will be it… we will have proof of concept and be able to get it rolled out to other customers.”

Typically, the lanes would be running from distances of one to 10km away from the port, although Mr Wychocki said that for Brazil Santos, it would be about a 40km journey.

Under the company’s business model, it will retain ownership of the equipment and simply charge per box movement, with an aim of $80 per container.

“We want our service to be cheaper, cleaner and faster than moving goods by truck, so with a truck movement costing around $100, we would look towards $80,” he said.

“The rise of megaships has caused incredible bunching in ports, with insufficient space to handle them and no space in the ports or on the roads for the necessary truck movements.”

When asked if the system posed a risk to civilians or cars underneath, Mr Wychocki stressed that the idea was to run the lines along existing corridors.

This, he said, would prevent eyesores, while any lines that did go over populated areas would be fitted with a system to catch any boxes that may drop.

“But our systems have, so far, yet to fail in terms of dropped boxes but we are prepared if they do,” he continued.

“We are not planning this as a short-term fix either, we would be building systems for 2030 volumes; we have a 10-year vision.”