News / Cathay imposes 'airfreight adjustment' for fuel, as Lufthansa goes 'back to basics' 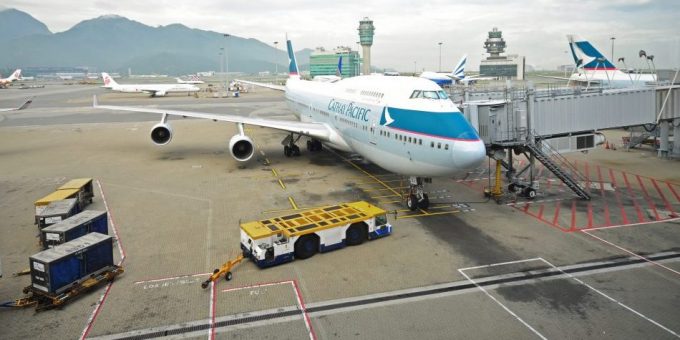 The quality carriers are fighting back, following the news that Emirates is to raise prices.

In a note to customers seen by The Loadstar, Cathay’s Hong Kong office noted yesterday: “Since the suspension of the cargo fuel surcharge in the Hong Kong market from April 1, fuel prices have risen considerably and remain the largest and most unpredictable variable cost item for our operations.

“In order to address the huge volatility in the fuel price, CX Cargo will introduce the airfreight adjustment as a variable component for all contract and ad-hoc shipments out of Hong Kong.”

It said the adjustment would be made monthly, depending on fuel price changes, and take into account the amount of fuel used and the incremental increase in cost from a baseline of $37/barrel. It is then based on chargeable weight.

One forwarder asked: “Sound at all like a fuel surcharge?”

It has been no secret that Cathay’s cargo arm has struggled this year. Yesterday, it released June traffic figures which show a 7.1% increase in tonnage for the month, year-on-year, but volumes for the first six months fell 0.3%, with a 0.6% increase in capacity and a 2.3% fall in RTKs.

The carrier did not mention the new “airfreight adjustment”, but did cite low yields.

Mark Sutch, general manager cargo sales & marketing, said: “Helped by the half-year-end rush, the overall tonnage for June was healthy, thanks to growing feed from Asia.

“The Americas saw a surge in the export of seasonal produce into Asia, particularly from the west coast. Our new Madrid service was well-received by the cargo community and we filled the west-bound leg with consumer goods and carried fresh produce on the return leg.

“However, overall yield remains challenging, as market supply continues to outstrip demand. We will continue to diversify and develop special products, some of which have shown encouraging results.”

Cathay’s “airfreight adjustment” attempt to combat the challenges of the market came on the same day as Lufthansa Cargo announced its latest product initiative: a “basics” range.

Only available online, the carrier’s td.basic product is attempting to attract “particularly price-sensitive cargo”. LC says it will arrive, on average, three days later than its standard product for “extremely attractive prices”.

Lufthansa’s products have previously focused on high-quality, high-yield, but it has lost out on general cargo as a result. This offer attempts to rebalance that and bring back volumes.

“We are now adding a price offensive to our long-standing quality offensive,” said Dr Alexis von Hoensbroech, board member product and sales.

“With this innovative ‘basic’ offering, we are enhancing our product range and charting a path for growth in the standard cargo segment.”

The carrier has not announced the expected price differential between its basic and standard product, but Mr von Hoensbroech told local media it would be “substantial”.

The basic product will have a booking fee, to prevent blind bookings; customers will receive confirmation and a delivery time when booking, but find out an hour later which route the cargo will fly on.

The basic product is the second introduced by the carrier this year. Lufthansa is soon to launch its MyAirCargo line, allowing passengers and individuals to ship personal items, door-to-door if required.