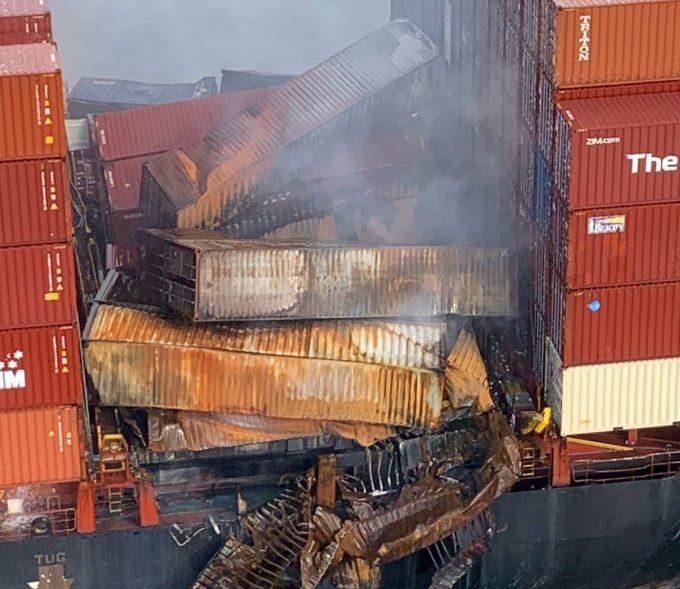 Israeli carrier Zim has confirmed that its chartered  and damage-stricken vessel Zim Kingston will depart its mooring at Constance Bank today, bound for Port Nanaimo on Vancouver Island.

The company said the Danaos-owned vessel would remain at Nanaimo before it is moved to DP World’s Dukes Point Terminal late next week for the discharge of damaged and contaminated containers.

A spokesman for Zim told The Loadstar: “It [discharge of damaged boxes] is expected to be a long process  and no final timeframe is available. We keep our customers and partners constantly informed regarding the progress of the operation.”

A Danaos briefing on the move said: “Once the operations in Nanaimo are completed, the Zim Kingston will be able to shift to a suitable container terminal to continue her unloading operations.”

The next port of call has not been identified, but The Loadstar‘s Canadian contacts believe the vessel will go to the Port of Vancouver to discharge its undamaged cargo.

Meanwhile, a Canadian government message has explained the precautions being taken to protect the vessel and the surrounding marine environment from any further damage as the vessel is moved.

“The government of Canada and its US partners are ensuring that when the vessel moves to its next location, it is done in a way that protects the environment and the safety of the ship and its crew,” said an email.

A review of the Zim Kingston and its seaworthiness has taken place and the ship has been granted permission to leave Constance Bank for Port Nanaimo. Canadian government officials confirmed it would leave its anchorage once the British Columbia coast pilots are onboard and weather conditions permit.

Furthermore, the Canadian authorities say they will make certain the ship’s move is secure by putting salvage team members onboard to monitor container stability, while two tugs, Canadian and  US coast guard vessels and environmental and marine mammal observation craft will escort the ship to Nanaimo.

A Canadian maritime expert explained to The Loadstar: “It has taken a very long time to make commercial arrangements. I had heard nobody really wants the ship in their terminals, given the backlogs and complications by the natural disasters in BC.

“I doubt anyone has great sympathy with the operators.”

Meanwhile, there is concern among some Canadian maritime experts that the initial stack collapse should be properly investigated. In a letter to Transport Canada, one maritime expert asked the body to “thoroughly inspect the vessel lashing material and securing points”, and added: “Even though the vessel was offshore, those stacks collapsed for a reason. We should want to know why.”