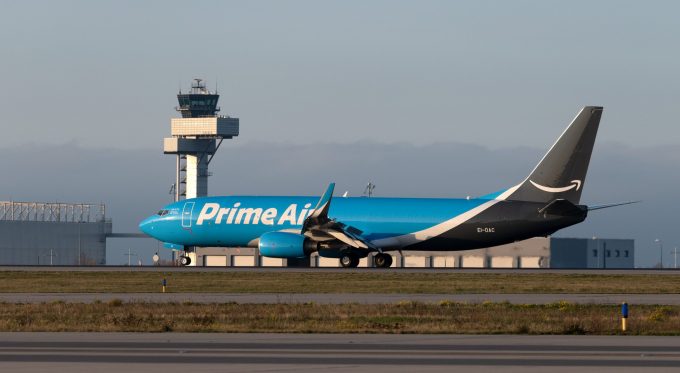 Amazon Air has taken off in Europe with two converted 737s, operated by ASL Airlines, with a third expected to join the fleet shortly.

The e-commerce giant launched its European operations from Leipzig/Halle Airport, where it has built a 20,000sq metre cargo facility.

One of the aircraft is flying between Cologne, Madrid and Malpensa, according to a flight tracking site, while another left Shannon for Leipzig on Friday.

The third aircraft is currently in Shanghai, where it arrived on 25 September for conversion. All three were formerly operated by Ryanair and acquired for conversion by Gecas, and they will be the first in Europe to sport the Amazon Air livery.

Amazon said the Leipzig site was already receiving two daily flights, which has helped it create more than 200 jobs in the community.

“We appreciate the support of the community in embracing these operations and the long-term economic impact and job creation opportunities we will bring to the region,” said Dietmar Jüngling, former general manager of the Amazon Fulfilment Centre in Leipzig who now leads the Amazon Air team there.

“We have been hard at work to train a team to build our air cargo network in the region, while maintaining a safe working environment. Our objective is to ensure we are able to support the changing needs of customers during this challenging time and beyond.”

Michael Kretschmer, minister president of Saxony, added that Amazon’s presence would likely attract other “innovative” companies to the region.

“Companies and end customers benefit from strong, reliable supply chains. And how important these are has become particularly evident during the Corona pandemic.”

Leipzig/Halle Airport noted its “exceptionally good infrastructure and our recognised expertise in air freight” and said it would continue to “invest heavily”. It is the second largest German air freight airport, and the fifth-largest in Europe.

Leipzig/Halle reported in September that it had recorded its strongest growth in volumes in eight years, up 18.6%, while growth in the first nine months was 8.1%.