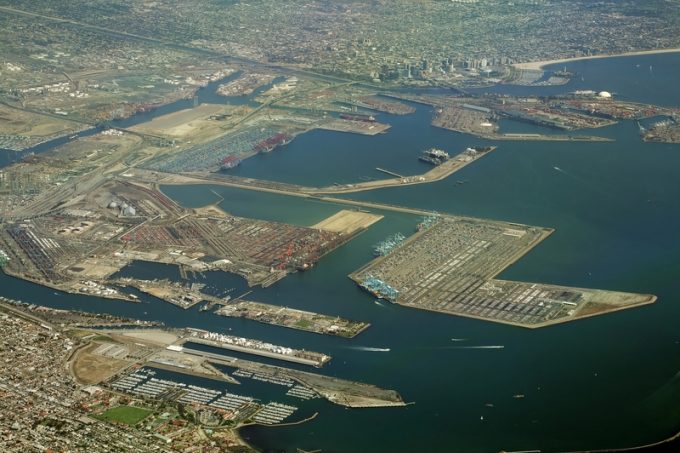 Container throughput at Los Angeles hit an all-time high of 9.3m teu, while neighbouring Long Beach is set to announce a record of some 7m teu.

“US consumers are confident and the economy has been strong,” said Long Beach Harbor Commission president Lou Anne Bynum.

The optimistic outlook at the nation’s biggest ports was reflected by Los Angeles Mayor Eric Garcetti, who said: “We are powering Los Angeles’ economy to new heights every year because we know that lasting prosperity means investing boldly in jobs opportunity and growth.”

Not to be out done by its larger state rivals, the port of Oakland last week reported 2017 as the busiest year in its history, handling 2.4m teu, driven by a 4% increase in imports and a 6.4% year-on-year jump in December.

And container throughput at US east coast ports is also booming, with the nation’s third biggest, New York/New Jersey, showing around a 6% growth in imports last year and the Gulf port of Houston up 14% on the year before.

Indeed, President Donald Trump’s first year in office has seen the Dow Jones index soar above 20,000 for the first time and, this month, smash through the 25,000 landmark – some economists predicting the index is on course to break 30,000 this year.

Data published last week by Global Port Tracker (GPT) said final US import numbers for 2017 were expected to be up by 7% on 2016 to reach around 20.1m teu: a “strong year” for retailers.

However, the GPT predicts that the growth rate would “slow down some” during 2018.

It is difficult to see when this will happen; one transpacific carrier source told The Loadstar his Asia booking desks were still reporting “strong numbers going forward”, adding that this was “well beyond” the Chinese new year holiday, which falls on 16 February.

In fact, transpacific carriers are in bullish mood and, notwithstanding the usual softening of demand around the CNY, are actually looking for general rate increases to coincide with the period.

For instance, Hapag-Lloyd is asking for a $700 per 40ft GRI from 15 February and other carriers are said to be rolling out similar price hikes.

After the disconnect of full ships but declining spot rates for most of 2017, transpacific container lines are keen to boost market rates ahead of new annual contract negotiations which begin in March.

2017 finished on a high with a year-end GRI spiking spot rates from Asia to the US by 29% for west coast ports and 24% for the east coast.