'What's the spread on that?' Cheers as BIFA Freight Awards go live again 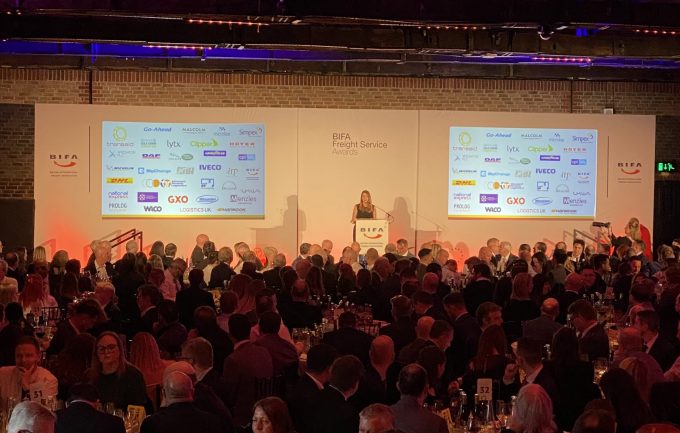 After the madness of the past couple of years, there was an air of euphoria at yesterday’s BIFA Freight Service Awards ceremony in London, when around 500 forwarders were let off the leash to go on the lash.

Routinely held on the third Thursday of January, during what would normally be the beginning of the slack season, the annual BIFA Awards, are often rumbustious affairs, but this year there was a particularly strong sense of release as people actually got to see each other in person and not via a  Zoom call.

Host Matt Dawson, the ex-England rugby player now professional raconteur and TV personality, watched one award winner stagger off the stage clutching his prize, then he turned to the audience and noted: “Blimey, he’s not going to make it past six, is he. What’s the spread on that?”

Stumbling out of The Brewery on Chiswell Street to the nearby All Bar One, you could at times be forgiven for thinking that the pandemic was just a bad dream.

It wasn’t of course. Attendees swapped coronavirus accounts like war veterans comparing battle stories, because the British forwarding industry has had to deal with the triple challenge of maintaining operations during lockdowns, navigating freight markets that have been little short of bedlam and good old Brexit, despite the UK government’s best efforts to throw a spanner in the works at pretty much every opportunity.

So, huge congratulations to this year’s winners… but actually, even bigger congratulations to the industry as a whole, (and BIFA itself, of course, led with admirable dignity and an ever-present sense of humour by director general Robert Keen), for all the challenges it has overcome and what it has managed to achieve in the face of such considerable obstacles.

There were many outstanding entries for the 2021 awards, which were presented at The Brewery in London, despite a year beset by multiple operational difficulties and uncertainties caused by the pandemic and the UK’s EU exit.

In the Specialist Services category, newly sponsored by Newage, the winner was Your Special Delivery Service, while the other finalists included B&H Worldwide, Cargo Overseas and Kerry Logistics.

Hemisphere Freight Services literally ‘went the extra mile’ to win the Extra Mile Award, sponsored by Descartes, ahead of the entries from fellow finalists Evolution Forwarding, Pentagon and Unsworth UK.

In the returning European Logistics category, sponsored by TT Club, the winner was Killick Martin & Co, with the other finalists being Espace European, Simarco Worldwide Logistics and Unsworth UK.

Finally, BIFA director general Robert Keen presented the Special Recognition Award for services to the international freight industry, as well as charitable activities, to Gordon Day, who, after retiring from the industry following a very successful career, is now a stalwart of the London Freight Club and well known to BIFA members.

Mr Keen said: “After a truly extraordinary and very challenging two years, it was great to meet in person to celebrate excellence across the freight forwarding industry, with awards that are now in their 33rd year and justifiably regarded as the most prestigious in the sector.

“I congratulate all the companies and individuals that won each category, as well as those that were shortlisted. “I would also like to recognise the support and contribution of the sponsors to the running of the competition this year. Their representatives gave their time to carry out judging and selection of winners for each award.”

The BIFA Freight Service Awards 2019 competition will culminate in a glittering Luncheon Ceremony on ...

All the winners as Dame Kelly Holmes hosts the Bifa Awards

Yesterday (Thursday) the great and the good of UK forwarding descended on London for the ...

Last week the great and good of the UK freight forwarding industry came to together ...