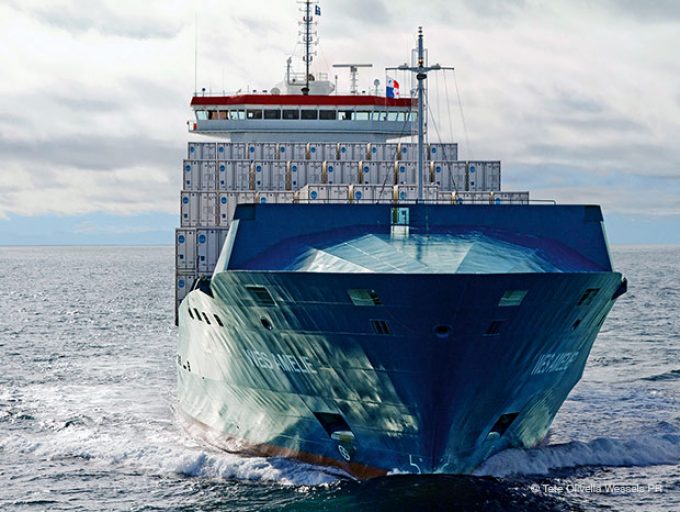 The duel-fuelled, 1,000 teu Wes Amelie, owned by Germany’s Wessels Reederei and chartered by Unifeeder, will service multimodal shipments on the carrier’s shortsea routes between Rotterdam, the Baltics, and Poland

Head of shortsea sales in Europe for Unifeeder Florian Ambach told The Loadstar the carrier would bunker in Rotterdam for the “time being”, it being the only available fuelling facility.

“We want to increase the number of vessels under LNG technology, however that depends on when shipowners will start to convert more vessels,” said Mr Ambach.

“And Unifeeder sees the deployment of this vessel as a big step forward as LNG fuel offers a huge environmental improvement compared with fuel oil.”

Shortsea director Niels Kjaer-Richardt said while technical solutions were not yet “optimal”, it was vital to search for options, adding Unifeeder was proud to be a “front runner” in regard to LNG.

“The actual retrofit and its financing is only one side of the story. We need an LNG infrastructure in place providing easy access to LNG as bunker, and LNG has to be cheaper than the usual petrofuels.

“The transition to LNG as fuel is not easy, and at this early stage the ship operator or charterer expects benefits from using LNG-fuelled ships. It’s unacceptable that the shipping companies have to foot the bill alone to protect the environment.

“In an ideal scenario, each transported container would have to pay a SOx, NOx or CO2 levy, and this would be explicitly used to support green shipping initiatives,” he added.

Director of policy at the International Chamber of Shipping Simon Bennett told The Loadstar described LNG as a clean fuel with “clear advantages”, particularly with regards to SOx – and the Wes Amelie would, of course, be trading in the Special Emissions Control Area (Seca) of Northern Europe.

“There are also potential benefits when it comes to reducing CO2 emissions, although these have to be weighed up against the possibilities for methane slip,” said Mr Bennett. “LNG is part of a multi-fuel proposition to help in the medium term, and although it won’t decarbonise the industry it gives time to look into other fuel options for the long-term.”

While this may be the first shortsea vessel converted to use LNG, a precedent was set when United Arab Shipping Company placed an order in 2014 for 17 “LNG-ready” vessels.

The 15,000 teu Sajir was the first delivered in a series of ultra-large container vessels (ULCVs) of up to 18,800 teu, which the Middle East-based carrier proudly described as the “world’s most eco-efficient vessels”.

And the recent CMA CGM order with Chinese shipbuilders to build 22,000 teu ULCVs is understood to include a dual-fuel stipulation.

The Wes Amelie conversion was by engine manufacturer MAN and is documented in the video below.