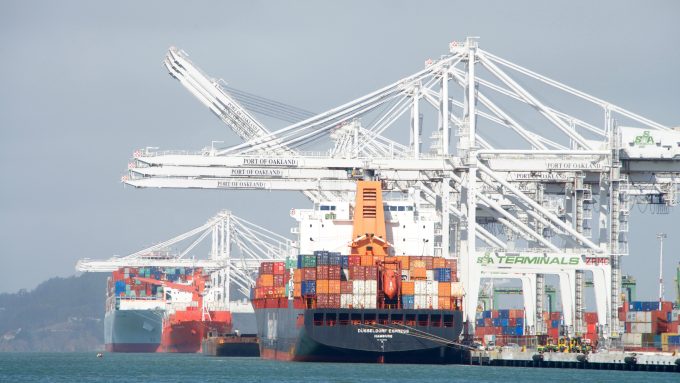 China’s Golden Week holiday this month saw container spot rates from Asia to the US ease back, while short-term rates to Europe ticked up a few percentage points.

The Freightos Baltic Index (FBX) Asia to US components recorded a 7% decline for both US west coast and east coast ports, to $16,749 and $19,429 per 40ft respectively.

Elsewhere, the Ningbo Containerized Freight Index (NCFI), which reflects spot rate trends, saw its US west coast index slip slightly, by 0.8%, and its east coast index edge down by 0.7%, as it reported “full loads” for departing sailings this week.

Nevertheless, there appears to have been an opportunity for some forwarders to grab space at heavily discounted rates in last minute deals during the holiday period, due to power outages causing production cuts.

Shabsie Levy, co-founder and CEO at online freight forwarder Shifl, told The Loadstar that in recent weeks co-loading of cargo had declined and that transpacific space had been sold to freight forwarders at a discount.

“We were paying $17,000 per feu, but more recently the rates have fallen to $8,000,” he said.” “Freight forwarders have space to fill and once one drops their price the others are forced to follow.”

For Asia-Europe, both the FBX and WCI indices recorded small percentage increases, the FBX up 1% for both North Europe and Mediterranean ports, to $14,703 and $13,121 per 40ft, respectively.

Freight rates between North Europe at the US east coast have soared by over 200% since March, as carriers took out capacity to deploy on more lucrative routes, despite strong demand. Shippers on the route, however, are facing an increase in surcharges as congestion at the US east coast ports worsens.

For example, MSC has advised its customers that, from 1 November, it will increase its PSS (peak season surcharge) to Savannah from $1,700 to $3,700 per 40ft.

However, the real bad news for shippers is that analysts are now expecting that supply and demand restrictions with a subsequent freight rate correction will not occur until at least the third quarter of next year, revising earlier predictions of a return to some form of normalisation after the Chinese New Year in February.

In its latest review of the market, analyst Maritime Strategies International said there was “a very strong case in our view that the industry will not revert back to average pre-pandemic unit revenues”, adding that there was “a defensible case that those levels will not be seen again over our forecast horizon”.

There was a further slight softening of container spot rates from Asia to the US ...

The world’s largest container manufacturer has joined the gold rush on transpacific liner routes. The Loadstar ...

The Loadstar Podcast | October 2021 | Episode 6: When will the madness end?

Episode 6 of The Loadstar Podcast turns its focus on the chaos currently affecting global ...