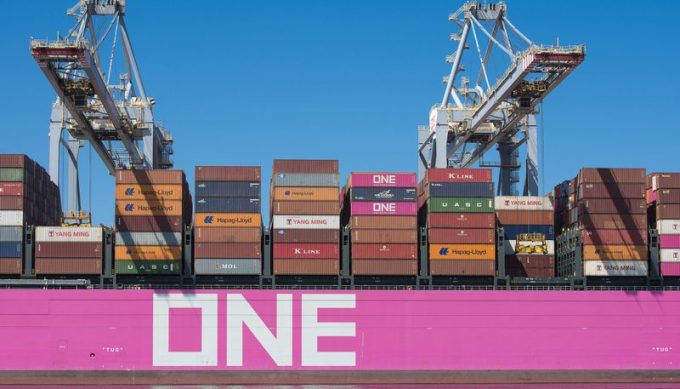 Japanese carrier ONE has said its ships have raised their speed, increasing fuel consumption and pollution, to take advantage of higher demand.

THE Alliance carrier and its partner Hapag-Lloyd have both reported stellar profits for the second quarter.

ONE posted net profits of $2.6bn for its fiscal Q1, while Hapag-Lloyd reported an estimated ebit of $2.2bn, in preliminary results.

This comes despite the Singapore-based Japanese line noting increased costs, “due to faster vessel speeds to improve schedule reliability”.

Hitherto, carriers have tended to avoid any suggestion that they were authorising their vessels to speed up, due to environmental concerns.

However with the cost of fuel now a much lower percentage of the extraordinarily high freight rates carriers are charging shippers, the incentive is there to speed up to carry more freight – even though the carrier reported “severe shore side and inland congestion”.

Even so, ONE said, “significantly improved” increases in both short- and long-term contract rates boosted profits.

Moreover, both carriers have now significantly upgraded their full-year outlook: ONE with a forecast of $6bn net; and Hapag-Lloyd with an ebit in the range of $7.5bn-$9.5bn.

Lars Jensen, CEO and partner at Vespucci Maritime, noted that Hapag-Lloyd’s top-end forecast for 2021 would be more than double its ebit for the whole of the past 12 years.

And both ONE and Hapag-Lloyd appear to expect these massive profits to continue for some time.

ONE said it was “extremely difficult” to forecast future earnings, while Hapag-Lloyd said it had reversed its earlier outlook for the second half of a “gradual normalisation of the earnings trend”.

It added: “In addition to stay-at-home demand, cargo demand related to consumers returning to pre-pandemic activity is recovering.”

For example, growth on the Asia-North America tradelane in the first six months of the year was up 27% on the same period of 2019, before the Covid outbreak.

Headhaul vessel utilisation levels between April and June on ONE’s biggest region, the transpacific, which accounts for around a third of its volumes, was at 100%, with the carrier lifting 615,000 teu during the period. It also recorded a 100% load factor on its ships from Asia to Europe, lifting 436,000 teu in the quarter.

However, on the backhaul leg from North America to Asia, ONE’s carryings of 328,000 teu saw vessel utilisation of only 54%.

In contrast, on the backhaul from Europe to Asia, load factors were quite impressive, at an average of 82% per vessel, with liftings of 339,000 teu.

Hapag-Lloyd’s full results will be published on 12 August.