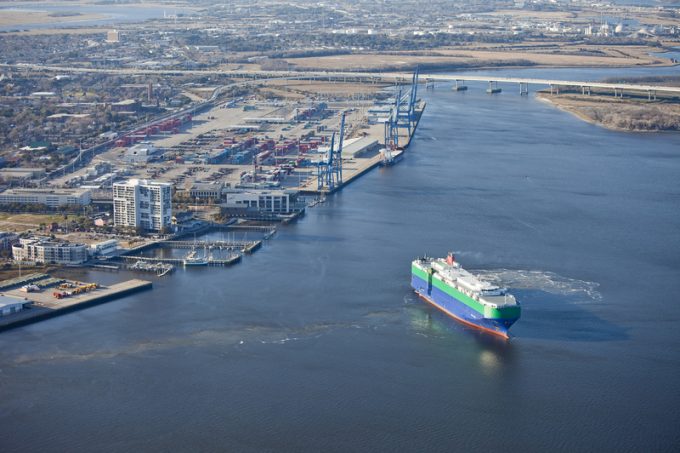 The port of Charleston is gunning for a bigger slice of the pie of container traffic moving through US east coast ports.

It broke ground last week on a near-dock intermodal facility seen as a game changer for intermodal flows and next month is set to complete dredging so it can handle post-panamax vessels.

The project to dredge the harbour to a depth of 15.8m, which removes tidal restrictions for fully loaded post-panamax vessels is nearly done. The final part, a 14.6m depth for the channel to the port’s North Charleston terminal, is scheduled for completion next month.

The other major upgrade in the works is a near-dock rail facility, slated to open in July 2025. One mile from Leatherman terminal, the port’s largest container facility, it will have nearly 24,400 metres of rail track for a capacity of one million lifts in the first phase of the project. It will be connected to the terminal by road.

Class I railways CSX and Norfolk Southern will use the intermodal facility in partnership with Palmetto Railways, a Class III short-line rail firm serving the state of South Carolina.

These developments follow $2bn in investment in infrastructure and operations to allow the port to compete with Savannah and Norfolk. For the latest projects, the state of South Carolina is chipping in $550m, with $400m of it going to the rail yard.

This year the port has brought in 15 cranes with a height of 47m for the Wando Welch container terminal, which has received $500m to modernise its container and reefer yards, strengthen the wharf and establish an on-terminal transload facility.

South Carolina Ports, which owns and operates public seaport facilities in Charleston and Georgetown as well as inland ports in Greer and Dillon, also decided this year to acquire 12,900 chassis to address the chronic shortage in this area, a major factor in the build-up of congestion at US ports over the past year. Charleston is now one of two US ports that owns its own chassis pool.

So far about half have arrived. The port authority expects final deliveries by next March.

Of all the investments, the establishment of near-dock rail is regarded by many as the lynchpin of Charleston’s quest for a bigger role for containerised flows through east coast ports.

One industry executive believes on-dock rail is the superior solution, as it means no drayage or need for chassis or power. He added that the container yard was the biggest constraint in a terminal, more important than the number of cranes or the length of quay.

“This will begin to level the playing field between Charleston and Savannah,” said Craig Grossgart, SVP ocean of Seko Logistics. “On-dock rail provides a cheaper and better service. It will attract business,” he added.

“This resolves the last remaining competitive disadvantage we have as a major east coast container port,” she said. “This critical infrastructure project will greatly enhance SC Ports’ capacity, allowing imports and exports to swiftly move between the hinterland and the port of Charleston.”

In a flanking move to the creation of the near-dock facility, the port is setting up an inner-harbour barge operation to move boxes between Wando Welch and Leatherman terminals on a designated marine highway to connect the former container facility to the new rail site.

So far, the port has fared well this year, despite the lack of rail access at its docks. Last month, container throughput at the Wando Welch and Leatherman terminals reached 226,807 teu, up almost 11% on September 2021.

The port’s management is confident that traffic will remain strong in the fourth quarter, noting that its volume is more driven by automotive traffic than retail imports, which are slowing as retailers are grappling with excess inventory.

Check out this clip from The Loadstar Podcast of Xeneta’s Peter Sands talking about the US ports sector.