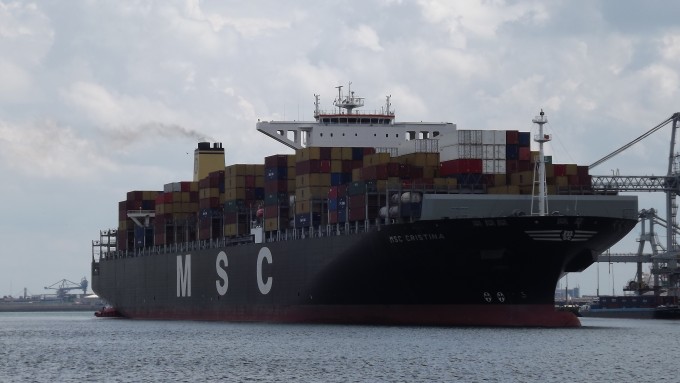 Having already been obliged to idle two of its flagship 19,000 teu vessels because of weak Asia-North Europe bookings, MSC is cascading some of the 13,000 teu ships from the overcapacity-plagued trade onto its Europe-Mid East-South Asia service where demand is said to remain “comparatively robust”.

In an updated analysis of the trade, Drewry said the Geneva-headquartered carrier was leading the way in increasing ship size on the route, noting that it had deployed the 13,102 teu MSC Cristina and MSC Maria Saveria on its Himalaya Express service, operated with Shipping Corporation of India.

In a further boost to capacity, MSC will also add the 11,660 sister ships MSC Luciana and MSC Sola to the service, Drewry added.

While not recording the same double-digit growth of a year ago, eastbound traffic from Europe to the Middle East/South Asia grew by 5.3% in February, year-on-year.

On the backhaul route in February, growth was recorded as 12.7% from the Middle East to Europe and was up by 13.4% from South Asia.

“Carriers have responded positively to the feel-good traffic volumes on a trade that has become a shining light in an otherwise dark market,” said Drewry.

Hapag-Lloyd and Hamburg Sud, who partner on the Europe-Indian Ocean service, have also upgraded their fleet, replacing 5,900-6,600 teu vessels with ships of 7,300-9,000 teu, increasing capacity by up to 3,100 teu on the eight-week rotation.

With phased capacity upgrades, eastbound capacity from Europe to the Middle East jumped 13,000 teu in March, said Drewry, with the MSC leviathans pushing capacity up even more in April.

And from Europe to South Asia, the “capacity spike” was even greater in March, at 17.6%.

For the westbound trades, Middle East to Europe capacity growth was an aggressive 14.8% in March and 9.7% from South Asia.

The westbound figures also reflect the launch of a new service last month from CMA CGM and UASC – the Indian Sub-Continent Mediterranean Express (IMEX) service, for which the former contributes one ship and the latter six.

However, Drewry warned that it was “only a matter of time until overcapacity takes hold” on the route, suggesting that there was already cause for “alarm bells” to be ringing.

It said: “While traffic growth is encouraging, the rapid and ongoing upsizing of ships serving the trade sounds alarm bell. With MSC being the first to deploy ‘new-panamaxes’, others will most likely follow suit, bringing in a surplus of capacity.”

It warned carriers on the route that “the spectre of overcapacity could soon shake its robust standing”.