News / E-commerce fulfilment a challenge for cities, but green schemes are working 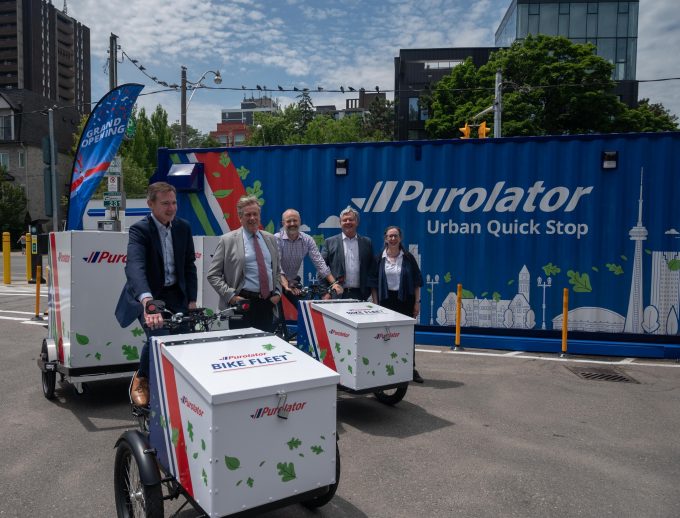 E-commerce fulfilment has brought challenges to urban administrations worldwide, as they try to mitigate its impact on local communities.

Some are working with parcel carriers, while others banish them from central areas.

Purolator Courier, Canada’s largest parcel and express carrier, is experimenting with a new distribution concept for e-commerce in the nation’s largest city, Toronto. Last month, it opened a mini retail outlet in a parking lot.

This latest micro fulfilment hub is a 40ft container, from where local residents can ship or collect parcels. Attached to it are five electric cargo bikes for local deliveries.

The project is running with the blessing of the city of Toronto’s Freight and Goods Movement Strategy, which aims to make the transport of freight and goods safer, more reliable and more sustainable.

The city and Purolator are planning a second container-based mini hub on the campus of the University of Toronto’s Transportation Research Institute next month, with the institute set to conduct an extensive analysis of its impact, especially the replacement of larger vehicles with e-bikes for local deliveries.

The two container stations are expected to help reduce traffic congestion and cut CO2 emissions by 68 tonnes a year.

A recent trial project run by the City of London Corporation in partnership with DHL Supply Chain and Ford Pro suggests collaboration between local administrations and logistics providers is the way forward.

The project, for which DHL provided electric vehicles from Ford Pro, aimed to streamline deliveries from Billingsgate Market to around 40 commercial customers around the city. Many of the traders at the market use their own vans for deliveries, and these sit idle much of the day.

The project, which started in March and ran over 18 weeks, resulted in 949 fewer vehicle journeys and reduced carbon emissions by an estimated 37%.

Tutu Akinkoye, GoGreen lead for DHL Supply Chain UK and Ireland, said the integrator had hopes of applying the concept elsewhere, adding: “The solution is replicable in other cities facing similar challenges, both in the UK and globally.”

PostNL, the Dutch postal provider, is turning downtown Den Haag into a testing ground for eco-delivery solutions. Parcels are moved from its parcel hub in Den Hoorn to a hub in the periphery of Den Haag’s downtown area. From there they are delivered by ‘light electric freight vehicles’, which can carry up to 800kg.

And PostNL has also signed an agreement with Q-Park, an operator of city parkades, which calls for the installation of 20 parcel lockers in ‘parkades’ across 15 Dutch cities, including Amsterdam, Rotterdam and Utrecht.

Some municipal administrations have taken a hard line over e-commerce, particularly against dark stores for ultra-fast deliveries, which have met much resistance in residential areas. Amsterdam, one of the cities that have taken steps in this direction [see Loadstar, 31 March], went one step further in May. It introduced guidelines that ban micro fulfilment hubs from residential and mixed-use areas, confining them to commercial zones. According to some reports, this is forcing delivery firms to shut facilities in the city.

For delivery firm Zapp this was apparently a killer blow. It reportedly had to close two dark stores in Amsterdam and announced it would withdraw from the Dutch market.

TakeToNews reports: The online store Bol.com is alarmed after the arrest of the CEO and the ...

Against the odds: GXO's benchmark status – Ceva, Ryder et al, are you watching?

With the first CL episode well under way, fear missing out…