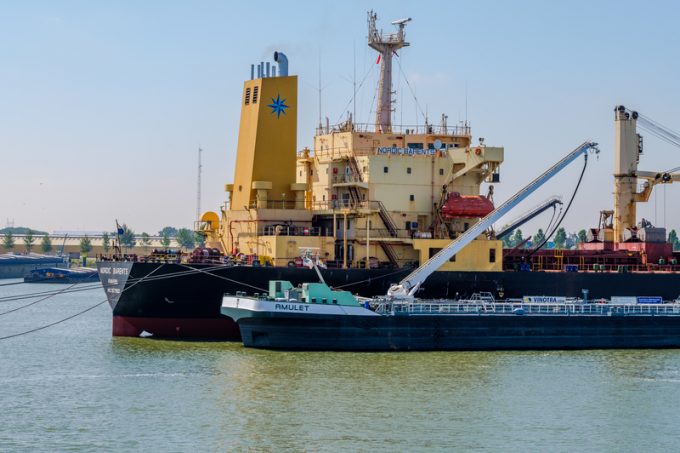 Shipping lines that have invested in scrubber technology to comply with the IMO 2020 low-sulphur regulations may be forced to reconsider the wisdom of their investment, as fuel producers appear to be looking for ways to push prices up.

However, the declining availability of HFSO is forcing its price up and causing headaches for shipowners keen to see a return on their investment in scrubber systems which allow ships to continue to burn the fuel.

“The spread of HFSO and LFSO is narrowing because the former is becoming more expensive and people are trying to make money out of it – prices of HFSO are going to go up.

“With the advent of IMO 2020 we expected the price of HFSO would come down a lot more than it has, but the refineries took action to reduce the supply,” said Ian Lamerton, sales manager at bunker broker LQM Petroleum Services, speaking at the Clean Shipping Alliance annual general meeting in London yesterday.

“HFSO is still available in all the main ports, but bunker barges are becoming increasingly tight, which means that suppliers are concentrating on contract volumes and there is limited spot market availability – and where there is some, it will take seven to ten days to arrange.

“The HFSO spot market is very tight in the Middle East – only three out of 10 suppliers in Fujairah responded to a quote we put out there recently. It is even tighter in Saudi Arabia, where they have stopped issuing prices on the spot market, and it appears that all HFSO is now going to their power stations.

“It is much more available in Asia, but the issue there is the availability of bunker barges – about half of the barges in Singapore have been cleaned up to carry LFSO,” he said.

One of the major issues is the way that ships are refuelled – typically ocean-going ships are refuelled by bunker barges that tie-up alongside while in port or at anchor, and once those barges have been cleaned to carry LFSO, they cannot carry HFSO for fear of fuel contamination.

“In Europe, the situation is also tight – last week I would have said that there was good availability in Rotterdam but that has now changed,” said Mr Lamerton.

“We recently sent out requested quotes to bunker a VLCC [very large crude carrier] and I would normally expect five bids; but we only had two and there was no room for negotiation.”

And to add further uncertainty, French refiner Total responded to environmental pressure and stated last week that would stop selling HFSO to power stations – the other major consumer of the fuel.

“And I think this will mean that it will also stop selling HFSO to the shipping industry for the same reason,” said Mr Lamerton. “For shipowners that have contracts, this situation may not be much of a problem, but it might well become more difficult after those contracts have expired.

“Meanwhile, the supply of LFSO on the sport market is completely different – in all regions there is good availability,” he added.