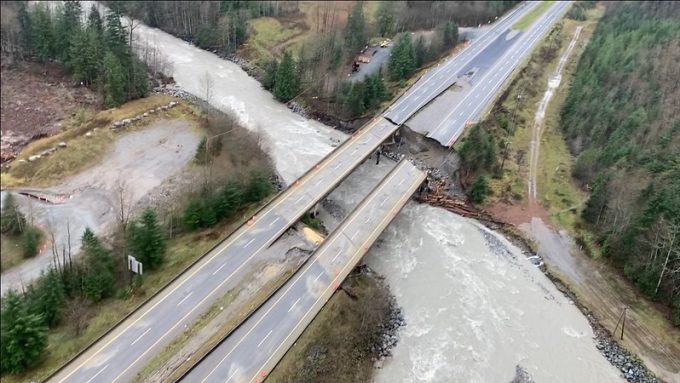 UPDATED 22 NOVEMBER TO NOTE THAT VANCOUVER HAS NOT BEEN EVACUATED.

The Canadian military has deployed transport planes, helicopters and several hundred troops to assist in Vancouver where, since Monday, flooding and mudslides have left much of the city cut off by both road and rail.

On Wednesday, British Columbia’s minister of public safety, Mike Farnworth, declared a provincial state of emergency for 14 days, with one confirmed death, and four people missing.

Meanwhile the most recent reports from the port of Vancouver show “significant” and likely long-lasting disruption.

Highway 7, after being cleared of rocks and debris, was opened intermittently to allow evacuation of refugees, but is now closed again, and further assessment of the damage to the road network continues.

Highways 1, 3, 5 and 99 are “closed due to mudslides”, according to a customer advisory by Hapag-Lloyd.

Meanwhile, engineering teams from railways Canadian National and Canadian Pacific are yet to report the full extent of the damage to tracks, with debris blocking the lines and major repairs needed.

“CP’s operations between Spences Bridge and Falls Creek remain suspended following heavy rains that have resulted in multiple track outages,” Canadian Pacific reported on Wednesday, adding: “There is no time estimate for when service will resume.”

According to a Maersk Line advisory today: “Additional rain and slides are heightening the situation and extending delays.”

And the carrier further reported that “all exports destined for the port of Vancouver have been embargoed as of last night. In addition, no perishables (reefers) to-from POV/VIF are being accepted”.

It explained: “All intermodal and carload traffic northbound and eastbound from Vancouver, as well as traffic inbound to Vancouver from east/north of Kamloops, continue to be affected by this situation.”

Maersk predicted major disruption to port operations “for the next few weeks”, adding that “we will see increased congestion at terminals and expect vessel delays”.

According to the eeSea liner database, Vancouver serves 18 Asia-North America strings, a couple of regional services and THE Alliance’s North Europe-North America TA5 service that transits the Panama Canal.

The port, home to terminals operated by Global Container Terminals and DP World among others, handled just under 3.5m teu last year.

One possible option for shippers is to use the alternative Canadian Pacific port of Prince Rupert, which has so far been unaffected by the problems.

It said: “The Prince Rupert Port Authority is fully engaged in supporting the response to the devastating impacts of the flooding in southern British Columbia and is ready to help the communities and supply chains being impacted by it.

“The Port of Prince Rupert remains fully operational and is not experiencing any impact to port or rail operations related to the extreme weather events and is ready to activate its full capacity.

“A number of terminals have the ability to handle additional cargo and are actively engaged with shippers and CN [Canadian National] to assist in facilitating the movement of critical goods, supplies and trade,” it added.