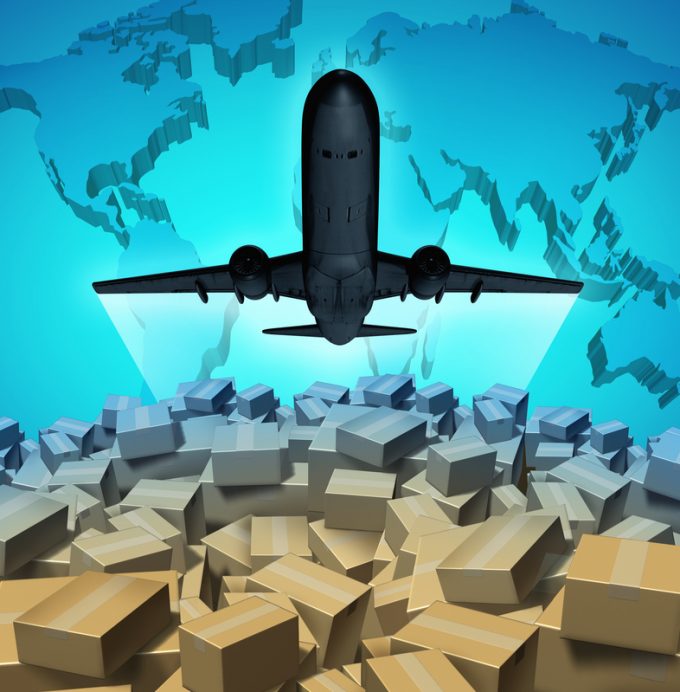 The air freight market is starting to see rates fall as capacity comes in – and demand subsides.

New figures out today show May volumes have improved month on month, but the past two weeks have seen demand dip, perhaps signalling “more challenging times ahead as airlines return capacity to the market”, warned Clive Data Services, which published the figures.

But, noted Clive: “After a series of week-over-week growth in volumes, a decline set in during the week of 18-24 May, followed by an even stronger decline for the last week of May.

“During these last two weeks, the capacity growth rate versus the previous week was higher than the volume growth, thereby reducing the dynamic loadfactor for the first time in weeks, by 0.5%.

“This easing of pressure on capacity had a downward impact on freight rates on major tradelanes, as recently reported by the TAC Index.” 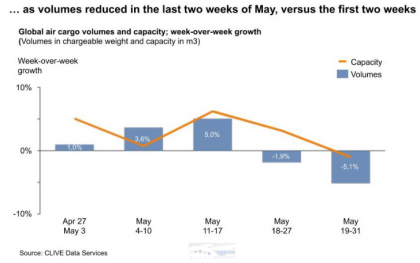 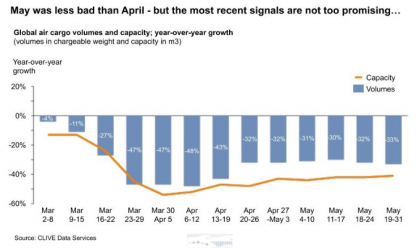 Freight Investor Services noted: “A new month, a new day and whole host of cascading impacts as prices begin their long crash back to some semblance of normality.

“The air freight market is on the cusp of the unknown – while the container freight market sees a positive price tick linked to a volume rush, businesses need to keep an eye out for false positives, given container capacity is heavily restrained to cope with original slack demand.

“In theory, this should open up an opportunity for air freight to take up shipments that need to move and can’t risk being rolled. For this to happen, the price of this service needs to become more competitive…

“While air cargo has been touted (by us and many others) as a key element in airline fortunes over the next two years, the question remains as to how meagre or plentiful these fortunes might be.”

Meanwhile, IATA’s April numbers are also out today – but it is hard to be either surprised, or even much interested, to know that April’s air freight market was down, year on year. But it was less disastrous than March.

IATA’s latest figures show demand fell by 27.7% compared with April 2019. But capacity was down 42%. You can read more here.