Recently we reported how Port of Nansha was the fastest-developing port in South China. Port of Nansha belongs to the portfolio of the Guangzhou Port Group and is a combination of the busiest domestic port terminal and a fast-developing international business.

With its new infrastructure projects being finalised and delivered, Port of Nansha will further transform to become the freight hub of the Greater Bay Area, in the Pearl River Delta.

After a lot of investment and positive development, Port of Nansha will also welcome the THE Alliance (Hapag Lloyd, ONE, HMM and Yang Ming) to its terminal. THE Alliance will start calling with one of its Far East Europe trade services (the FE2). It is expected that more services, like transpacific USWC/EC, Mediterranean and Middle East, will follow.

All three major shipping alliances now have direct services to and from the Port of Nansha, connecting Europe, the Middle East and North America directly in the major east-west trades, as well as directly north-south, especially the African trades and Intra-Asia.

The reasons for Port of Nansha’s success?

For many years, Guangzhou Port Group has stepped up its investments in the area, not only building new terminals, but also new warehousing capacity and multimodal connectivity. The goal is to reach a true freight hub status for the combined infrastructure.

In June, major general warehousing development will be delivered. The construction has taken two years.

And in the coming months, in Q3, the new temperature-controlled facility of more than 30,000 square metres of warehousing, with several cold rooms per floor, divided over three  units of eight floors, will be finished. This facility will be the biggest of its kind in South China. And it is an important answer to the growing demand for temperature-controlled storage space and value-added services, like distribution hubs, especially for e-commerce business.

In this respect, it is ideal to have the new warehousing capacity in the Free Trade Zone in the Port of Nansha.

Another major infrastructural development will be the direct on-dock rail link, which will be finished by the end of this year. Currently, it is estimated that it can be inaugurated in November. This will be an enabler to divert new business streams from or to inland provinces, via Port of Nansha.

Transformation in the Pearl River Delta:

While Shenzhen is more and more developing as a tier-one city (more than 10 million inhabitants) increasingly focusing on service industry, financial products and hi-tech,  production disappears or moves to the west site of the delta, in the hinterland of Port of Nansha. And land for logistics development, like terminals and warehouses, has become more difficult to find.

Cost benefits for local transport, as well as lower port and warehousing costs compared with Shenzhen and Hong Kong, will enhance this growth trend for Port of Nansha. 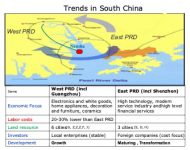 Since the recent Covid-19 crisis, many logistics managers have re-analysed their supply chains and looked at dependencies and alternatives.

In this context, quite a few companies have identified the Port of Nansha as a good alternative to Shenzhen, or even Shanghai and Ningbo, especially for the inland provinces.

Very recently, we have seen a limited shutdown of Yantian terminals because of Covid-19 problems. This caused diversion of port calls and bookings to neighbouring ports and, to a great extent, to the Port of Nansha, which has now frequent direct sailings to North America and Europe.

Because of these major reasons for its success, and the creation of cost and operational benefits for cargo owners and logistics providers, Port of Nansha believes that for the foreseeable future it remains a fast-growing port and can welcome more customers that would like to experience the benefits of its services and infrastructure.

This article was sponsored by the Port of Nansha

In the aftermath of the Yantian port congestion crisis, South China container trades could be ...