World trade is expected to contract again over the next three months, according to DHL’s Global Trade Barometer (GTB).

It suggests that the overall trade outlook will reduce by two points, to an index value of 45, in a new low not seen since December 2015.

And it also shows a steady contraction, with no acceleration – but DHL has opted for an optimistic narrative.

“According to the DHL Global Trade Barometer the year will probably end with moderate world trade. However, we’ve to bear in mind where we come from: the rapid growth world trade has undergone in recent years was like climbing Mount Everest.

“Now, we are on the descent, but we are still breathing altitude air,” said Tim Scharwath, chief executive of DHL Global Forwarding, Freight.

However, Eswar Prasad, professor of trade policy and economics at Cornell University, said the GTB update was “sobering” and gloomy”.

“The world economy is entering a phase of stagnation, reflecting weak and slowing growth in some major economies and essentially no growth or mild contraction in others,” he said.

“Persistent trade tensions, elevated political instability and geopolitical risks and concerns about the limited efficacy of monetary stimulus continue to erode business and consumer sentiment, with detrimental effects on investment and productivity growth.

“Growth in household consumption, which has underpinned recent economic performance, has stayed strong but is weakening in major advanced and emerging market economies.”

He added: “The declining indices for China and the US, the two main drivers of global growth, portend a worsening global economic outlook. Overall, this GTB update paints a sobering picture of gloomy prospects for the world economy and global trade for the remainder of this year.”

With the exception of India, all seven surveyed countries saw indices below the 50-point threshold of no growth. China has the weakest outlook, down three points at 42, with US trade down one point and Germany down three.

Germany’s outlook was particularly affected by the weak air trade outlook, which dropped seven points to 45. The air outlook overall dropped three points to 42, with all seven countries showing contraction. Ocean trade’s decline is less significant, down two points to 46, with India seeing growth and China seeing the biggest fall of four points, to 43. 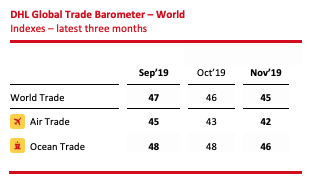 While India was the only country expecting moderate growth, the other interesting developments are Japan and the UK, both of which had positive outlooks in the September data, but now record the highest declines and fall below the 50-point growth threshold. 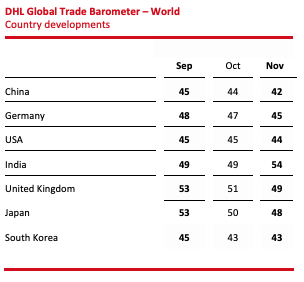 ING: T&L sector enters new phase of recovery – but there are headwinds

ING wrote earlier this week that the global transport and logistics (T&L) “sector recovery is ...

HSBC: Who will bear the burden of oil?

Despite two years of damage and disruption from Covid-19, logistics professionals are “remarkably” bullish on ...

Many companies have been watching China to see if it can predict the fate of ...

DHL's Tim Scharwath's bittersweet 'what could have been' scenario

It may be written by Tim Scharwath, chief of DHL Global Forwarding, but this will ...