News / JB Hunt eyes revival in struggling intermodal market, but it will be a hard slog 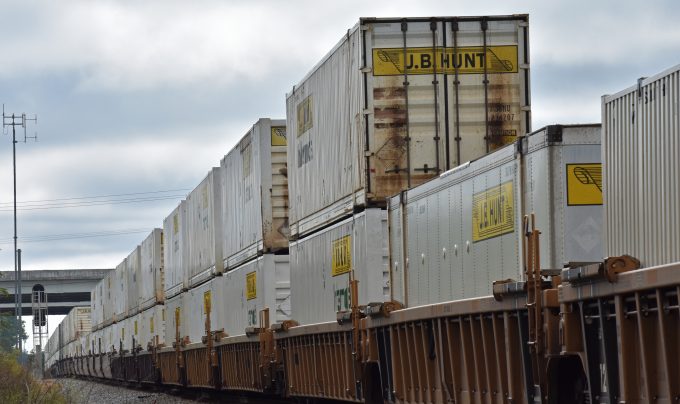 After a disappointing 2022, intermodal heavyweight JB Hunt is resigned to a flat first quarter – but hopes for a revival in the spring, citing positive signals from clients.

However, the intermodal market in the US is facing serious headwinds, which may not dissipate until much later this year.

JB Hunt missed market expectations in the final quarter last year, with earnings of $1.92 per share, more than 50 cents lower than anticipated. Revenues climbed 4%, year on year, to $3.65bn, but were 3% down once the fuel surcharge is factored in.

About 46 cents of the decline per share stemmed from a $64m pre-tax casualty insurance expense. Management said, when announcing the results, that claims settled about five to ten times higher than they would have done five years earlier. CFO John Kulow expects core premiums to rise 15%.

Of JB Hunt’s divisions, the truck brokerage segment fared the worst in the last quarter, showing a 33% decline in revenue as loads slumped 27% and revenue per load fell 9%.

Intermodal revenue increased, however, but loads slipped 1% year on year, with average loads per box down 3%. During the period, its container fleet grew 9.7%, with revenue per load down 3% on the third quarter.

JB Hunt president Shelley Simpson described the situation as “an inventory correction” and blamed the results chiefly on a recessionary freight climate she said was largely inventory-driven.

“There is an inventory correction happening that we expect to continue to occur through the first quarter,” she added.

While she does not expect the situation to turn around in the coming weeks, she expressed optimism for the spring and beyond, saying the company was receiving “good signals” from customers about the second quarter.

The US intermodal sector was largely flat between last June and October, not showing the usual spike in volumes associated with peak season. Intermodal spot rates on Union Pacific and BNSF railroads were level with or below contract rates through October, confirming the absence of a peak season uptick in business.

Seriously elevated inventory levels were not the only reason for tepid demand for intermodal service, though. Shippers have had reservations about the mode, in light of congestion and service problems the railways have struggled with.

“Our customers are positive towards reconverting highway business that should be on intermodal, but I think they are appropriately cautious,” said Darren Field, president of intermodal, adding that they were looking for evidence that the railways’ performance had improved.

Service has recovered a fair bit, he said. BNSF’s intermodal trains recorded on-time arrivals above 70% in the third quarter, up from 40%-60% in the first half of last year.

With lower volumes and capacity generally available, shippers have shifted their focus from finding capacity to costs and carrier performance, explained Ms Simpson.

While service has improved, the railways are facing stiff competition for freight from the trucking sector, according to consulting firm FTR Transportation Intelligence. On sectors under 1,200 miles, intermodal rates were just 5% lower than truck pricing, it pointed out.

Meanwhile, the long-distance portion of intermodal traffic has shrunk with the migration of US imports out of Asia from west Coast to east coast ports. While this has extended transit times, it has brought down the inland portion of import moves.

FTR is predicting a struggle for intermodal businesses in the US this year. In addition to the factors mentioned above, it projects tepid demand well beyond summer, indicating that growth could happen in the fourth quarter. Until then, intermodal providers seem to be in for a long, hard slog.