News / Intermodal struggles to be alternative mode for US container transport 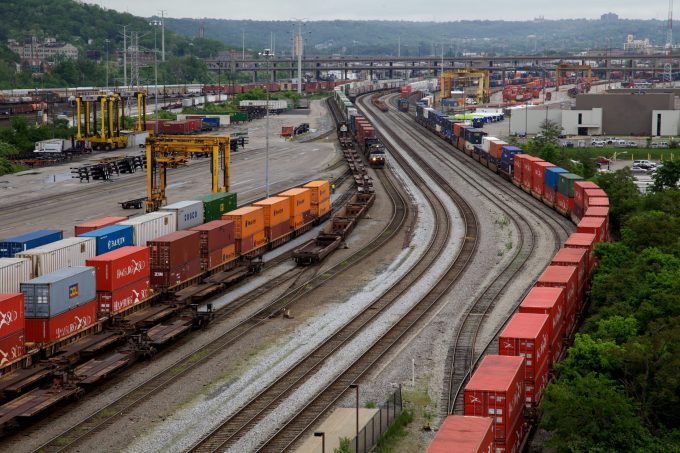 With the trucking sector losing steam and soaring fuel prices pushing shippers to rein in costs, intermodal traffic should be on the ascent in the US, but the latest numbers show a continuing downward trend.

According to the Intermodal Association of North America (IANA), intermodal volumes dropped 6.6% in the first quarter, year on year. International registered the steepest drop, falling 15.5%, while IANA’s intermodal trailer count was down 12.8%.

The seven intermodal corridors with the highest traffic density, which account for some 60% of all volumes, all showed declines, led by a 15.3% slump in the south central to south-west sector.

The Q1 decline follows contractions in the previous two quarters. IANA statistics for Q4 21 show a drop of 9.8% in intermodal volumes, following a 2.9% slip in the third quarter.

According to the organisation, the issues that drove down volumes in the latter half of 2021 – congested terminals, driver and labour shortages and equipment misalignment – are expected to continue through the first half of this year.

In fact, pressure on the system will likely increase. Importers and operators are bracing themselves for a surge in imports from China once the lockdown in Shanghai ends.

However, the downward trend continued well into April. The most recent statistics show a 9.8% decline, year on year, in intermodal containers and trailers for the week ending 23 April, while rail carloads sank 4.5%. And through the first 16 weeks of the year, intermodal units were down 7%.

In a historical reverse of patterns, domestic traffic outperformed international box flows in the first quarter for the first time in 21 years.

Domestic container numbers increased 5.5% from a year earlier. A major factor was that some inbound intermodal shipments were stuck in ports and subsequently transloaded into domestic units, but arguably the bigger trend was the ongoing decline in intermodal traffic which, according to some observers, has been on the wane since November.

Current market conditions – notably soaring fuel costs and slowdown in trucking demand – point to a favourable climate for intermodal business. Some observers have argued that the slowdown in trucking demand reflects a shift in customer priorities from speed of delivery to cost containment, as rail and ocean volumes have eased less. Intermodal traffic translates into lower fuel costs than trucking, and it has been described as “storage in slow motion”.

On the other hand, shippers have been wary of the intermodal option as a result of lengthening dwell times of intermodal containers at ports and chassis shortages in a number of locations. The Class I rail carriers have come in for some criticism for not acting fast and decisively enough to meet the recent problems.

At a hearing on rail performance issues held by the US Surface Transportation Board last week, FMC commissioner Carl Bentzel argued that the major rail carriers could have done more to improve intermodal flows through ports. He stressed the importance of intermodal traffic due to a lack of space and land at the ports to rely on truck distribution.

The rail carriers have been accused of insufficient investment in intermodal equipment, such as 53ft containers.

But Mr Bentzel suggested the blame did not fall squarely on the rail operators. He pointed out that US intermodal traffic had lost ground over the years to intermodal services from Canadian ports to the US market. In part, this has been the result of better support for the concept from the government in Ottawa, both in terms of policy measures and funding, he added.