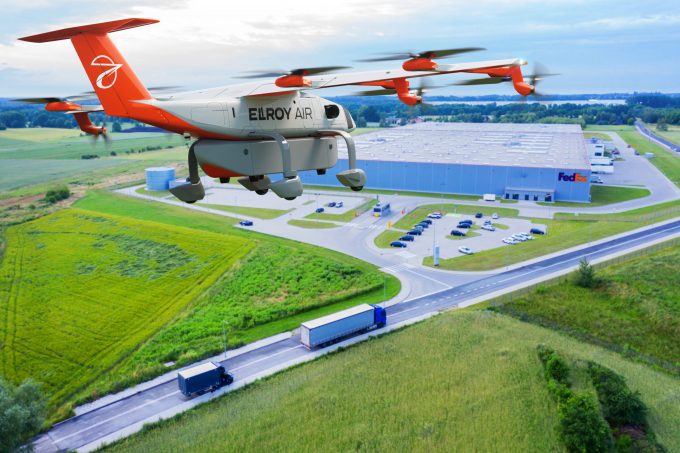 Commercial drones moving cargo beyond small amounts of pharmaceuticals are inching closer in the US.

The authorities there are considering proposals for drone corridors, and FedEx is targeting 2023 for trials of the Chaparral autonomous aircraft between its sort centres.

The Chaparral is a vertical take-off and landing (VTOL) aircraft announced by California-based maker Elroy Air in January. It can move 300-500 lbs (136-227kg) of cargo up to 500km, operating independently of infrastructure like airports or charging stations.

“FedEx was built on innovation and we are always looking toward new technologies to help enhance the logistics industry,” said Joe Stephens, senior VP, global planning, engineering and technology at FedEx Express.

To date, express operators have experimented with drones only for final-mile deliveries, but FedEx is aiming the Chapparal at a different sector. It intends to test it for middle-mile operations between sort centres.

The announcement comes in the wake of proposals to shift the regulatory landscape for cargo drone activities in the US. The Advanced Aviation Advisory Committee recently submitted a report to the Federal Aviation Authority (FAA) which suggests the establishment of dedicated routes for heavy cargo drones.

Drones would have priority in corridors that could reach up to an altitude of 400 feet (122 metres).

Equally ground-breaking would be the report’s recommendation to drop the mandate that restricts drone activities to line-of-sight operations. So far, drone operators have had to obtain waivers for this. However, it is unclear how fast the FAA will move on the report.

Tim Komberec, president of Empire Airlines, welcomed the development. Empire mainly provides regional flight services for FedEx (as its largest regional operator), but it has an offshoot running drone operations, Empire Unmanned. So far, this has worked mostly in agriculture and surveillance while watching cargo developments from the sidelines. For the most part, it has operated outside the US.

“In some countries it’s easier to work with the authorities to get things done. They seem to be quicker to adjust things,” Mr Komberec explained, adding that in comparison, US airspace was a monster of complexity.

Interest in heavy cargo drone activities is on the rise. In February, forwarder Flexport made headlines with a tentative order for two 100-tonne cargo drones from California-based developer Natilus, with an option for a third.

Natilus is planning a fleet of four drone models, with payloads of 3.8 tonnes, 60 tonnes, 100 tonnes and 130 tonnes, to serve airports just like the commercial aircraft they would compete or interline with. The drones will use the same ULDs and ground handling equipment as regular freighters.

Rather than operate its drones itself, Natilus plans to design, build and sell its unmanned aircraft like a traditional aircraft manufacturer. Natilus CEO Aleksey Matyushev expects the 3.8 tonne model to start flying next year.

Last month, the company signed a contract with Collins Aerospace for the design, development and integration of a special cargo loading system, with rolling ball mats, attachments and standard flip-up latches.

According to Natilus, there is lively interest in its cargo drones: in February, it announced advance purchase commitments worth $6bn for more than 400.

DC: As I look towards the future

President and CEO of FedEx Express Don Colleran on Friday wrote:  Today it was announced that I will ...

Transair 737s grounded after crash and probe into maintenance practices

Hawaiian carrier Rhoades Aviation, which was operating the Transair 737 freighter flight which landed in ...