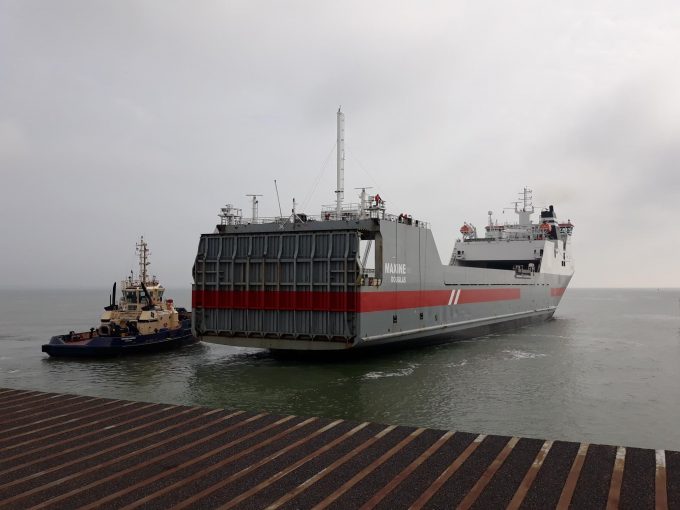 DFDS launched its new unaccompanied ro-ro service this week, offering a daily sailing in each direction between Calais and the Thames port of Sheerness.

It is the first regular ferry service at Peel Ports-owned Sheerness since Olau Line ceased calling in 1994. Since then, however, it has cemented its position as a key hub for finished vehicle shipments.

“It’s the first ferry service we’ve welcomed at Sheerness in more than two decades and its launch has helped create further opportunities for our customers, as well as the creation of up to 100 direct and indirect local jobs,” said Richard Goffin, port director, London Medway, for Peel Ports.

“We have been working with DFDS for several months to enable this new route, which will meet a growing demand for unaccompanied freight services.

The Danish ferry operator has chartered the Maxine (previously known as Gothia Seaways) from CLdN.

The vessel has capacity for 165 unaccompanied trailers or containers, and DFDS said it expected most of the unaccompanied freight volumes currently using its Dover-Calais and Dover-Dunkirk services to migrate to the new route.

Wayne Bullen, DFDS freight sales director, said: “Sheerness benefits from excellent road links with a close proximity to the M25 orbital ring, which is ideal for goods heading to the London area and the Midlands. With the current shortage of freight drivers, across Europe, expanding unaccompanied freight transport will provide a logical solution.”

The Europe-wide shortage of drivers was also determined to be the cause of a rapid growth of unaccompanied freight on DFDS’s Immingham-Cuxhaven route, the ferry operator said last week.

First-half 2021 volumes were up 18% on the previous year – first-half 2020 volumes were down 15% on the first half of 2019, suggesting that this year volumes have rebounded strongly, as they have across other UK-Europe ro-ro trades.

“Looking at the first half of 2021, we are even better off than we were before the Corona crisis in 2019. This is despite the continuing difficult market environment in the UK business, especially caused by the introduction of customs formalities since 1 January and the ongoing pandemic,” said route director Ortolf Barth.

Marcus Braue, branch manager at DFDS in Cuxhaven, added: “The volume development proves that our customers appreciate the advantages of unaccompanied traffic and the fact that the customs procedures are working as planned.

“Adapting our timetable to six departures a week and direction, along with a shortened time between the ports, was therefore the right decision.”