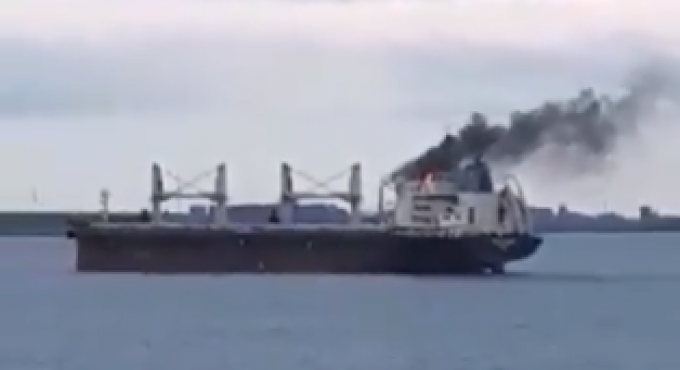 The shipping industry is on full alert following the death of a crew member on a Bangladeshi government-owned ship in Ukraine waters hit by a missile.

The attack, which set the ship on fire, has caused uproar in Bangladesh.

The Banglar Samriddhi had been at the port of Olvia on the Black Sea since 22 February, two days before Russia invaded Ukraine, with 29 crew members onboard.

This is the first incident and casualty in Ukrainian waters involving a foreign ship since the invasion. Russian soldiers have reportedly laid mines underwater in the Black Sea.

Crew member Hadisur Rahman, the third engineer, had been talking with family members by telephone on the deck, when the missile hit the 38,800 dwt bulk carrier of the state-run Bangladesh Shipping Corporation (BSC).

Following the incident, family members of other crew arrived at the BSC office in Chittagong today, demanding their immediate repatriation.

The government is trying to rescue the crew by sending a tugboat to relocate them to Moldavia, where they will stay in a bunker, according to Bangladesh embassy officials in Poland.

Another BSC vessel, Banglar Agradoot, is at Svetly Port in Russia to collect export fuel oil, is safe and remaining in the Baltic Sea area.

Russia is an important development and trading partner for Bangladesh, with $1bn in annual trade, and Russian funding is helping Bangladesh build its first nuclear power plant in Ruppur, in Pabna district. Bangladesh imports wheat, fertiliser and chemicals from Russia, and exports apparel, fish and vegetables.

Despite the Russia-Ukraine conflict, Bangladesh’s cabinet committee on economic affairs today approved a proposal to import 30,000 tonnes of fertiliser from Russian state-run Prodintorg.

Finance minister AHM Mustafa Kamal said Bangladesh expects the war will end soon. He said Bangladesh had long been importing fertiliser from Russia, adding: “If we fail to make payment due to SWIFT-related complications, we will have to pursue a currency swap system.”