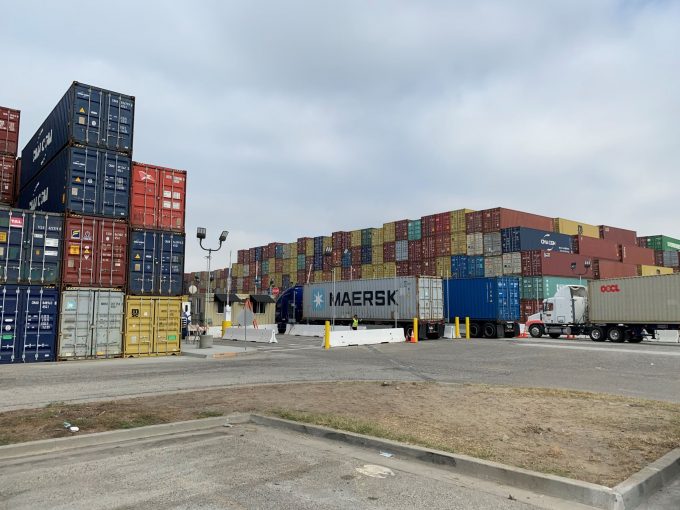 Walmart has developed an empty space near the ports of Los Angeles and Long Beach into a pop-up container yard.

The aim is to store containers off dock and alleviate the pressure the ports have come under since import volumes rebounded so heavily last year.

“Check this out – this was an empty lot near the LA/LB ports just four weeks ago,” posted Walmart EVP supply chain operations Joe Metzger on social media, with a photo (see above).

“Now it processes over 500 containers a day, helping to sort through priority freight for our downstream operations and, most importantly, having the inventory and stock for our Walmart customers for the holidays!”

The initiative from Walmart is not the first inland facility, but the expectation is that the import boom is transient in nature and these facilities will disappear when ‘normality’ returns to the supply chains into the US.

Nevertheless, Mr Metzger said: “This pop-up operation has dramatically improved our flow of containers, not only out of the port, but back into our port terminals with empty containers.”

Further east, the Georgia Ports Authority (GPA), with eager support from the White House. is setting up inland container stations to alleviate the congestion on its docks, with large importers also embracing the concept.

The GPA and railroad Norfolk Southern started to move containers through the the latter’s Dillon Yard, near the port of Savannah, yesterday in an effort to shift some container traffic away, and marked the start of a broader design to ease congestion at the port.

Later this week, the pair intend to route boxes to Statesboro Airport, some 60 miles west of Savannah.

If the concept is successful, the GPA plans to open four or five more ad hoc container facilities around the state in the coming weeks, and has also been holding talks with another major railway, CSX, about establishing a storage site in North Carolina.

Capacity on Savannah’s docks has been stretched: October brought a record-breaking influx of boxes. It handled 504,350 teu that month, up 8.7% from a year earlier.

The GPA has invested time and money in the set-ups at Dillon Yard and Statesboro Airport, renting top loaders, installing computer lines for container tracking and laying extra pavement at the yard.

It certainly helped that Washington is eagerly supporting the concept to shift boxes offsite. The administration has shifted $8m of previously allocated funding to the GPA for this.

The federal government quickly warmed to the idea of pop-up locations for container storage to relieve docks. Earlier this month, the Department of Transportation announced plans for five ‘pop-up ports’ to soak up some of the volumes and expressed hope for more such facilities in other areas.

GPA CVEO Griff Lynch said early this month that the port and its rail partners would move cargo for a set of retailers to locations closer to their distribution facilities. Several regular users of the port of Savannah have opened pop-up container yards.

Craig Grossgart, SVP global ocean at Seko Logistics, said that in normal times importers would be reluctant to embrace container ‘pre-pulls’, “but in these extraordinary times, they are certainly required. So, every spare lot that can accommodate containers is attracting top dollar these days”.

To be viable, such pop-up container yards have to be fenced, for security reasons, and need a manned gate for processing. If containers have to be stacked, the surface has to be sufficiently strong and a reach stacker is required, Mr Grossgart pointed out.

Usually, operators would avoid the associated cost, but under the current circumstances they are willing to shoulder the expense, he noted and added: “Once this mess goes away, so will the pop-ups.”

For the GPA, the new pop-up facilities supplement inland ports, part of its long-term strategy to extend its reach beyond the state of Georgia. That drive kicked off in 2018 with the establishment of the Appalachian Regional Port, an intermodal facility nearly 400 miles from Savannah, equipped to handle 100,000 containers a year.

The concept gathered momentum in recent years, and the congestion at major ports has added an additional push. This summer, both Long Beach and Oakland ports signed partnership agreements with the Utah Inland Port Authority, and in both cases the primary focus is on boosting flows between the ports and the inland facility, and shifting boxes off the docks quicker.

Inland terminals have been called release valves for congested ports, which suggests relevance only in times of extraordinary throughput, but some companies are treating them as longer-term options. Earlier this year, Canadian Tire, one of Canada’s largest retailers, acquired a 25% stake in Ashcroft Terminal, an inland port some 300km from Vancouver.