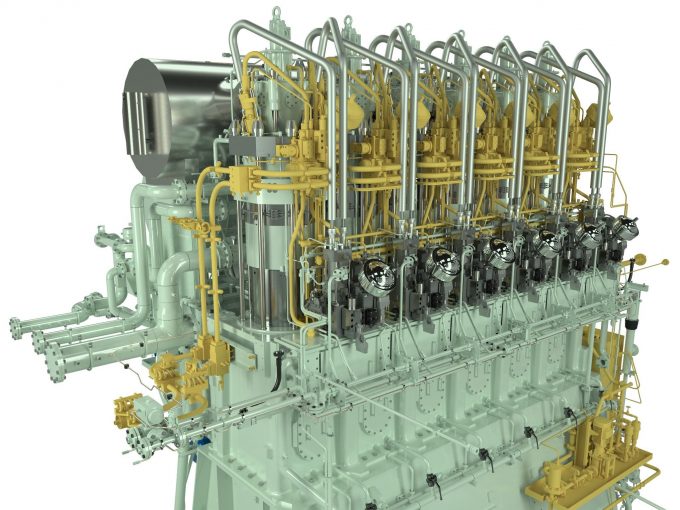 MAN Energy Solutions claims some 2,300 engines currently in service could be retrofitted to run on green fuels, potentially resolving a major hurdle for the decarbonisation of shipping.

MAN would not say how many of these engines were in operation on container vessels; however, assuming carbon-neutral e-fuels can be made available in sufficient quantities, this “massive number” of retrofits could reduce CO2 emissions from the maritime industry by 80m tonnes annually, said Klaus Rasmussen, MAN PrimeServ head of projects and PVU sales.

“The huge market potential within, for example, S/G50-, G95- and G80-bores for conversion to methanol running as ME-LGIM units is especially notable,” he said.

Retrofit could be achieved with the addition of a new fuel tank and feed system, as well as switching the gas block, injectors and pipes on the engine itself.

“No one beside MAN ES has a proven track record in converting two-stroke engines into dual-fuel engines,” Thomas Hansen, MAN Energy Solutions head of promotion and customer support, told The Loadstar.

The findings unlock the potential for hulls already on the water to convert to carbon-neutral fuels, rather than requiring an entirely new generation of ships to be built, addressing recent concerns over ‘stranded assets’.

Their owners would then be free to plough capex savings into the increased opex of new e-fuels, which are expected to cost several times the price of today’s fuels.

“Retrofit offers the attractive opportunity to prolong the lifetime of vessels from a technical, emission and commercial perspective (future-proof),” said Mr Hansen.

One of the less-often talked about benefits of retrofitting is a potential reduction in CO2 from the imbued carbon costs of building generations of new ships. Historically, shipping tends to respond to new emissions requirements by building new hulls and scrapping old ones; but according to recent estimates, a major shipyard requires about 200m KWh of electricity annually, meaning that there is a carbon cost to that option.

However, Mr Hansen said MAN’s announcement should not be taken as endorsing a specific future fuel type, and the firm was taking “an agnostic approach” to retrofit possibilities.

“The future-fuel landscape will consist of many different fuels, including green methanol, green and blue ammonia, bio-methane, synthetic natural gas and bio-fuels. There will not be one clear winner for all vessel sizes, types [and] trades.”

A Unifeeder-chartered vessel is to be used for the first trial of synthetic natural gas (SNG) ...

The Road Haulage Association (RHA) has called on hauliers to join its legal action against truck manufacturers ...