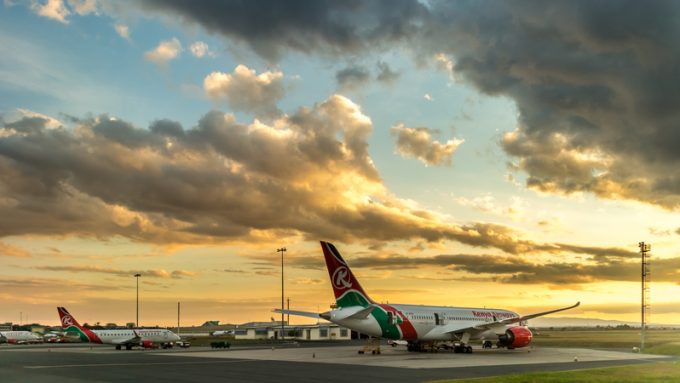 Kenya Airways has its eyes set west: last year, it opened its first route – in fact the only one from East Africa to the US – from Nairobi to New York.

“We are currently doing five rotations a week, but we’ll go back to seven for the summer season.

“Our long-term strategy is to go to more destinations in the Americas. We are looking at Toronto and Washington DC, those will be the first cities.”

He acknowledged that the pair are not necessarily big freight destinations, but added: “We are seriously discussing freighter options, to go where there is business.”

First, however, Kenya Airways (KQ) likes to ensure sustainable business. Dismissing Turkish Airlines’ claim to have seen 45% growth in the country, Kenya’s chief operating officer, Jan de Vegt, at Air Cargo Africa last week, said: “45% is not the growth of African cargo. It is about 5% a year.

“We look at ways to grow the business, not grow aircraft numbers. There must be a sound basis for it.

“We are looking to flowers to the US, but we want to build sustainable flows that will make sustainable cargo operations. That’s the way KQ wants to do it.”

One of the issues for east-west flights is the sheer amount of transatlantic capacity already available in the market, which makes a partnership with another airline an attractive prospect.

“KQ has the opportunity to hit both markets to supplement the whole programme, connecting markets in Europe and the Americas,” said KQ cargo GSA Michael Cox.

“The most attractive volumes are imports into Johannesburg, then position back to Nairobi for perishables to the EU.”

Nairobi is a key export hub for Africa – but as a result of this, together with liberal traffic rights,  there is a lot of competition.

“Because of that, yields have been going down as capacity goes up,” said Mr Murianki. “The Middle Eastern carriers are all coming into Nairobi for flowers and vegetables and then going to Europe.”

Mr Murianki has reservations about the liberalisation that allows this.

“Here in Kenya we are known as marathon runners,” he said. “Liberalisation changes whom you put in the race.”

He backs limited protectionism: “We want to create an environment for local carriers to compete in the market. Most are small, and don’t have the financial muscle to compete.”

He also noted the difference between state-owned carriers and private ones – the latter look more closely at their return on investment, he added.

KQ itself is a mix. The first African carrier to successfully privatise – the Kenyan government owns 48.9%, a consortium of banks owns 38.1% and KLM has a 7.8% stake – it is listed on three exchanges.

“Liberalisation hurts those private carriers like us and Astral Aviation.”

He said the top priority for the Kenyan government, however – from KQ’s point of view – was investment in infrastructure. But next is traffic rights.

“In the domestic market we should get preferential treatment so we can grow. Our neighbour Ethiopian is very much protected. Protectionism is not always a bad thing. I advocate some measured protectionism. We tell the government, if someone wants to operate out of Nairobi with fifth freedom rights, why not collaborate with us? Otherwise we’ll never grow, and the customer will never know that we can do it.

“The government should work in a way that appreciates what happens, offers solutions and doesn’t impede business.”

So what three wishes would Mr Murianki request from a passing genii?

“I’d reduce costs in African airports. Some are government monopolies and very expensive, it makes some destinations exorbitant.

“I want more intra-African trade. Freighters leave Nairobi full, and come back empty. That makes it expensive, we have to cost in the return journey – and add ballast to flights.”

The third wish is not for publication…but as a clue, it could be fixed by a touch of “measured protectionism”.

For more than 12 years, Cargo Human Care (CHC) has been providing much needed support ...

Better connectivity needed before African e-commerce can take off

E-commerce will struggle to take off in Africa without better connectivity and significant improvements to ...

Africa’s greatest advantage is its youthful population; the youngest in the world, the continent boasts ...