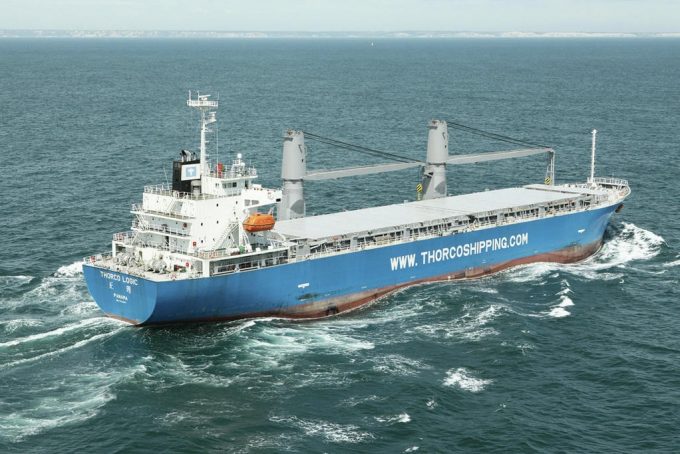 Taiwan’s Franbo Lines has joined a number of other bulk carrier owners hoping, amid tight boxship availability, eyeing lucrative charters to carry containers on their ships.

Franbo Lines’ vice general manager Lin Cheng-he told local media that out of its 18 bulk ships, five had container capacity and freight rates for containers remained much higher than for dry bulk.

Although the Baltic Dry Index is at an 11-year high, Mr Lin said Franbo could earn much more carrying containers from Asia to Europe and the US.

Mr Lin said: “We have five geared ships of around 17,000 dwt that can each carry around 212 teu on deck, so no modifications are required.

In a bid to cool a frenzy over what Mr Lin said, Franbo Lines issued a clarification to the Taiwan Stock Exchange that the profit figures were his opinion, and did not represent the company’s official outlook.

In July, The Loadstar reported that one of Cosco Shipping Specialized Carriers’ open-hatch cargo ships, Cosco Shipping Honor, had extra lashings installed to double its container capacity for a China-Brazil service. But P&I clubs have cautioned that modifying bulkers to carry containers could constitute a change of use and could undermine claims should there be accidents.

The North of England and West of England P&I clubs have advised members to contact their underwriters if they were considering shipping containers on bulkers.

But not all dry bulk players are considering going the same route. At a press conference last week, Chinese Maritime Transport chairman Tai Sheng-chien said: “Recently, there have been many strange happenings, particularly retrofitting bulkers to ship containers. These are special circumstances, and our company won’t take this direction.”

Noting that Swire Bulk among others had been carrying a small number of containers on its ships, Linerlytica analyst Tan Hua Joo said: “Some bulk carriers are able to carry a limited number of containers, but the numbers involved are small and I don’t expect it will be sufficient to tilt the supply-demand balance to have a material impact on container freight rates.”

Drewry’s senior manager (container research), Simon Heaney, said if bulker operators ensured that they could move containers safely, it was viable. He said: “[This is] simply because of the ultra-high freight rates, which is, after all, the whole reason for doing this. These new entrants will be temporary interlopers in the container world and will disappear as soon as prices drop.

“Even while they are here, they won’t impact rates because they have a very small carrying capacity and, in any case, the reason rates are so high is less about any shortages of ships, more so equipment availability.”

Meanwhile, French classification society Bureau Veritas has issued guidance for the conversion of bulk carriers to handle containers: Guidance for Studying and Preparing a Bulk Carrier for the Carriage of Containers.

It said the guide “provides operators with pathways based on analysis and a thorough understanding of safety, regulatory and operational requirements”.