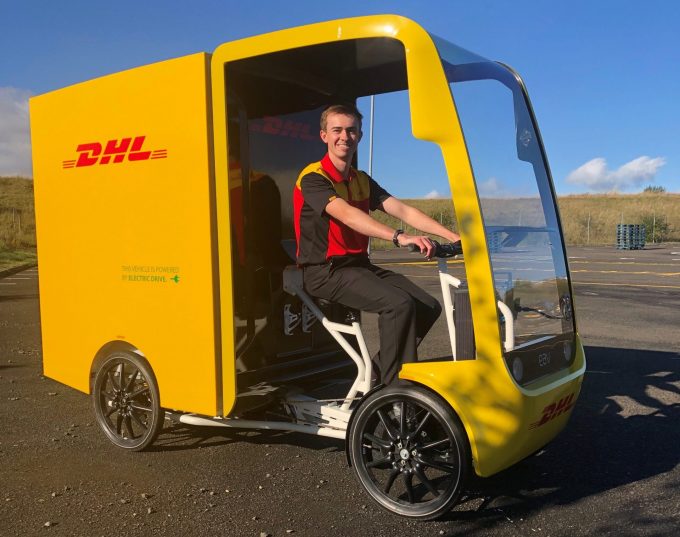 DHL is pushing ahead with efforts to make more deliveries by bicycle, with a trial phase of its latest electric cargo bike set to begin in Edinburgh.

The trial comes on the back of a raft of new “green solutions” announced over the past week from the logistics operator, which sees itself as ahead of its competitors on the push to carbon-zero.

The EAV 2Cubed bike (pictured) has a range of around 40 miles per charge and is expected to make between seven and eight deliveries a day.

EAV’s head of partnerships, Leo Bethell, said: “It’s pivotal for the logistics industry to adapt to the changing urban environment by embracing transport that is clean, efficient and unsusceptible to congestion.

“DHL has the opportunity to positively disrupt legacy operational models, while hitting its sustainability targets, with our zero-emission lightweight vehicles.”

In taking on the e-bike, DHL has added to its more recognisable  ‘Cubicycle’, which has been operating in Europe for several years, boasting capacity of up to 125kg of cargo and seeing most cycle couriers covering 50 km a day.

When asked why the Cubicycle had not been deployed in the UK, a spokesperson told The Loadstar the decision had been made based on the city environment and added: “This is an entirely different [bike] design, which we’re trialling exclusively in Edinburgh due to the city’s compact layout and terrain.”

The Cubicycle has faced problems getting beyond Europe, with plans to roll it out in New York – considered ideal for the bike – scuppered by a quirk of Manhattan law. Under city regulations, the four-wheeled cycle is designated as a car, leaving it open to associated taxes and preventing its use in cycle lanes. And while a work-around was realised – the development team removed one wheel – the pandemic impacted roll-out plans.

Nonetheless, DHL’s US spokesperson did note that the company has subsequently deployed a third model of cargo bike in Miami as it pushes its green agenda.

“We put the Cubicycle project in New York on hold for operational reasons and reverted to our [alternative-fuel] vans and walking couriers during the pandemic,” the spokesperson told The Loadstar. “It is unclear if, or when, we will resume in New York, but we are still actively looking at bike deployments, alongside our investments in electric vehicles.”

Although the Cubicycle is DHL’s most visual green symbol, the company has put far more electric vehicles, close to 20,000, onto the world’s roads, with thousands more operating under alternative fuel sources – using electric, hybrid or propane engines.

Representing the bulk of these is its in-house development, the ‘Street Scooter’, with more than 9,000 operating across Germany, Belgium, the Netherlands and Poland.

In June, DHL Freight trialled a bio-LNG-fuelled truck fleet for Grundfos; the results, announced last week, confirming that in the first five months of the trial some 87 tonnes of CO2 had been reduced from the customer’s emissions.

“By investing not only in sustainable fuel, but also in fleet renewal, engine retrofitting and efficiency projects, we tackle the impact of the logistics supply chain.”