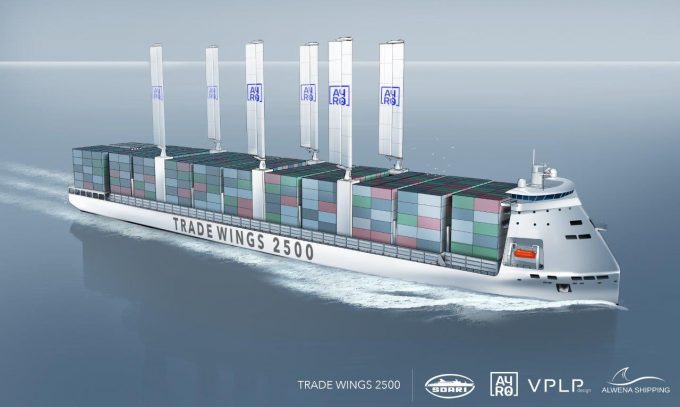 French ship classification society Bureau Veritas yesterday gave its ‘approval in principle’ to a new vessel design that could result in a 2,500 teu wind-powered containership.

The Trade Wings 2,500 has been designed jointly by French firms VPLP Design, Alwena Shipping and AYRO, in co-operation with Chinese ship designer and builder SDARI.

It has a length of 197 metres, a beam of 32 metres, a deadweight of 32,500 tonnes and is powered by a combination of six Oceanwings sails with an LNG-electric propulsion with pods.

The sails are installed on a vertical sliding mechanism to retract them partially while the vessel is in port, thus minimising the impact on cargo operations.

The LNG storage tank is based on GTT Mark III containment system, and the LNG power plant is designed with pure gas 4-stroke gensets only, and could be upgraded to use fuels of the future, such as ammonia or hydrogen.

The designers believe the vessel would be suitable for shortsea shipping or feeder operations in Europe, Central America, Caribbean and intra-Asia trades, as well as the transatlantic.

“The design minimises time in port operations, as manoeuvrability is increased with the pods, and the hatch’s coverless design further speeds up cargo operations,” the designers say.

Alex Gregg-Smith, senior VP Bureau Veritas for North Asia, explained: “Wind-assisted propulsion is a high-potential solution that can contribute to the long-term decarbonisation of the marine industry.

“We have just released new wind propulsion system rules – and this innovative design, approved in principle by BV, demonstrates the feasibility of wind-assisted propulsion onboard containerships with deck space limitations.

“The design provides both operational flexibility, improved efficiency and reduced carbon emissions, complying with, or exceeding, regulatory requirements,” he added.