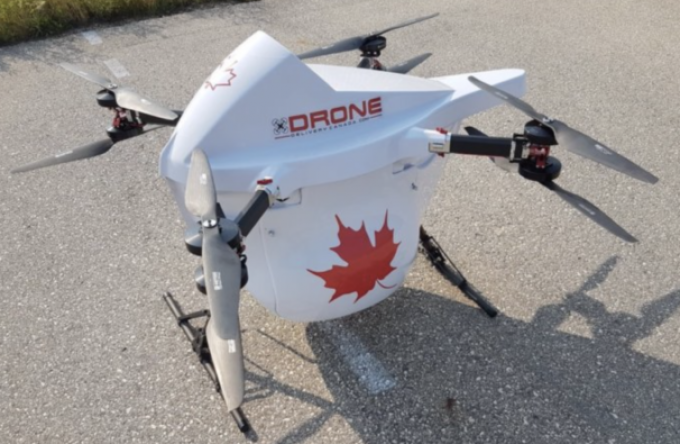 Drone Delivery Canada (DDC) and its marketing arm, Air Canada Cargo, are on the taxiway to commercial operations. The pair have announced the first commercial customer for the fledgling drone company, with operations set to commence next month.

Contrary to widespread predictions of commercial cargo drone activities kicking off in remote rural areas, DDC’s first client is looking to use its drones between its various properties in the suburbs of the Greater Toronto Area. And the drones are not going to carry blood samples or vaccines but parts, tools and repair equipment for Vision Profile Extrusions, a technology-driven group of companies focusing on the building products industry. The firm has several locations in the suburb of Vaughan within a radius of 20 kilometres.

The contract with Vision calls for DDC’s ‘Sparrow’ drones, which can carry loads of up to 10 lbs (4.5kgs), to operate between the manufacturer’s sites, remotely monitored by the drone operator’s commercial operations centre. The customer pays DDC a monthly fee for each drone route.

“There are revenues involved, but at this point we’re less interested in making money with this. A lot of potential customers want to see it,” remarked Tim Strauss, vice-president cargo at Air Canada and also a member of the advisory board of DDC. In early June the drone company signed a sales agency agreement with the airline that designates AC Cargo as the exclusive sales channel for DDC’s first 100,000 lanes.

In the agreement with DDC, Vision agrees to allow the operator to showcase its operations on the manufacturer’s sites to promote the drone delivery concept.

This is not the unfettered start of commercial operations for DDC yet, Mr Strauss said.

The drone operator has completed the proof of concept activities required by Transport Canada. As a final step before giving it free rein, the regulator has agreed to the suburban operation to see how it intersects with other modes of traffic in the region, he said.

Once this is completed, Mr Strauss expects commercial activities to ramp up quickly.

“We hope to announce three to five customers soon,” he said, adding that interest has been lively. Many visits by interested parties have been followed by second visits with senior management personnel and top management in a third round, he reported.

He sees several areas of promise for DDC’s operations, from closed–loop type supply chain service like the Vision agreement, to distribution activities and the carriage of supplies and medications to remote communities. DDC has run a number of trials moving supplies to remote areas in Canada’s north. Both these communities and various levels of government have shown strong interest in the use of drones for such purposes, Mr Strauss noted.

Air Canada’s agency agreement with DDC is for the domestic Canadian market, but the pair are also looking at international opportunities, he said.

The airline is looking to build up a dedicated sales force for the drone business. Mr Strauss reckons that this should be fully in place around this time next year.

This takes a good deal longer than the deployment of DDC’s drones. According to Mr Strauss, setting up a mobile system takes as little as 10 minutes, although longer time is required to train the customer’s staff, who perform the loading and unloading of the units and the recharging of batteries.