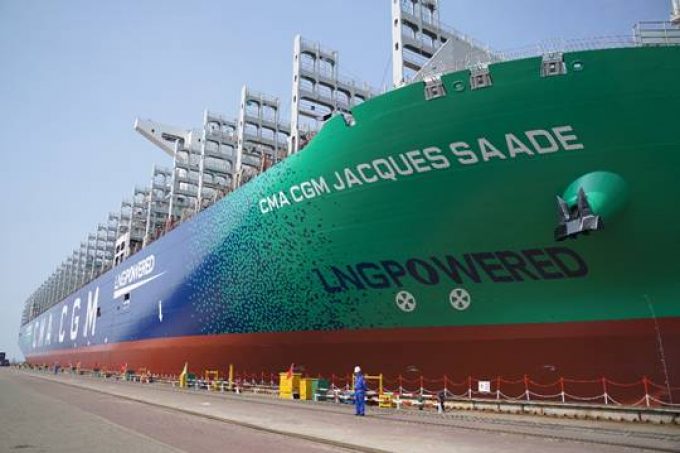 CMA CGM is pursuing an aggressive growth policy, increasing its capacity by 13% year on year and boosting its income in what remains a bull container shipping market.

Newbuilding deliveries allowed the French carrier to inch its way back past Cosco to retake third ranking, with a fleet capacity of 3,025,000 teu. This increase in capacity has seen the company raise its volumes carried by more than 10%.

As a result of the increased capacity and sustained demand for liner services, CMA CGM saw net profits spiral upwards to $2.1bn for the first quarter of the year, compared with just $48m the year before – and it said it expected results for the current quarter to be as good, if not better.

Its growth in volumes was virtually double that of Maersk Line, but less than half that of Ocean Alliance partner OOCL’s reported volume growth of 24%.

CMA CGM’s result is at the top end of the liner league, which has seen the sector rack up an estimated $19bn in profit in Q1, according to analyst John McCown, more than twice the returns for Q4 20, itself a record quarter.

CMA CGM chairman and CEO Rodolphe Saade said the synergy between the liner division and its logistics subsidiary, Ceva, had “proven particularly relevant”.

“Sustained demand for the transport of consumer goods is expected to continue throughout the year,” he added. “CMA CGM will continue to develop its solutions for its customers, while maintaining its initiatives in support of the energy transition of the transport and logistics industry.”

In terms of orderbooks, CMA CGM is third, behind MSC and Evergreen, with 531,000 teu in new capacity on order, including six 15,000 teu and six 13,000 teu LNG-powered vessels. By the end of 2024, CMA CGM will operate 44 LNG-fuelled ships cementing its pro-LNG strategy for the gas as a transition fuel.

In addition to the fast growth of its shipping sector, the group aims to capture high-end demand for air freight with its dedicated CMA CGM Air Cargo division.

“With the aim of meeting market demand for fast pick-up and reduced transit times, the group is expanding the coverage of its airfreight division to new regions with the additions of three new destinations this summer – Dubai, Beirut and Istanbul,” said the company.

Notwithstanding the newbuild orders and the 330,000 teu increase in its container fleet, CMA CGM is taking advantage of the record earnings to pay down some of its debt. It said net debt stood at $15.7bn at 31 March – down $1.2bn in the first quarter – including the balance of a $1.3bn French state-backed loan.