News / California ports build on rail capabilities, but there are fears of new congestion 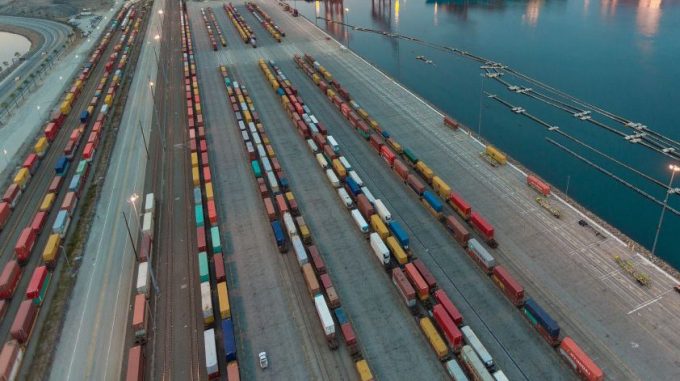 The ports of Los Angeles and Long Beach are moving to beef up their rail capabilities, with US imports expected to surge in the coming months.

The ability to move containers rapidly off the docks is seen as vital to cope with high traffic volumes and is fuelling several long-term projects.

Rail expansion is a major element of the port of LA’s budget for the coming fiscal year, which was formally adopted last week.

The $1.9bn budget includes $180.5m for capital improvements, with $34.3m going towards its Pier 400 Storage Track Expansion project, nearly half the overall cost of the five-year undertaking.

There is also nearly $1m for on-dock rail expansion at the Fenix Marine Terminal. The bulk of the money for this $50m project will be spent in the following two financial years.

The budget anticipates operating revenues of $628.1m, with $439.7m coming from shipping, and the port expects $334m of operational expenses over the period.

“Despite challenges across the supply chain, the port of Los Angeles and its many partners persevered and have kept cargo moving at a record pace,” said Harbor Commission president Jaime Lee.

“This success and hard work now allows us to reinvest in our port’s physical and digital infrastructure, sustainable technology and programmes, and in projects that benefit our communities and the LA waterfront,” she added.

Rail capacity expansion is also a major focus at the neighbouring port of Long Beach, where the declared goal is to move at least 35% of the port’s traffic through on-dock rail.

A key piece of this puzzle is the port authority’s ambition to transform its Pier B railyard into a modern on-dock rail support facility, where trains of up to 6,100 metres long can be assembled or broken down.

Having recently cleared the federal environmental review process, the project is now poised to move forward. It will more than double the size of the yard and add over 39,600 metres of rail, with the number of tracks jumping from 12 to 48.

The project has garnered $52.3m in grants from Washington, a reflection of the administration’s interest to keep imports moving through the gateways. US President Biden was in Los Angeles last Friday to discuss investment to bolster trade and build a resilient supply chain with senior port executives. Mario Cordero, executive director of the port of Long Beach, was appointed to the Maritime Transportation System National Advisory Committee last week.

Another project to relieve congestion on the docks at Los Angeles and Long Beach is a $30bn, 640km corridor from the port complex to Sacramento, which will include four major inland hubs to break down and load containers, plus seven smaller satellite stations.

While the major projects are in the planning stage, Mr Cordero declared the port of Long Beach ready for the traditional summer surge in traffic and the increase in volumes from the reopening of Shanghai.

Vessel congestion has eased in recent weeks and the line of vessels waiting for berth space at Andreas Bay shrank from 44 to 30 ships during May, and was down to 20 last weekend.

However, rail dwell times have gone up in recent weeks, which has been attributed to insufficient locomotives, rail cars and crews. For their part, the rail carriers have warned about a worsening shortage of chassis, blaming importers of holding onto containers on chassis as supplemental storage space while their warehouses are full.

Fears of more congestion are rising. Shipping lines have predicted a strong peak season ahead and the National Retail Federation projects import volumes between June and October will be 2% higher than in the same period last year.

California’s two major ports in the San Pedro Bay region is to levy a $10/teu ...