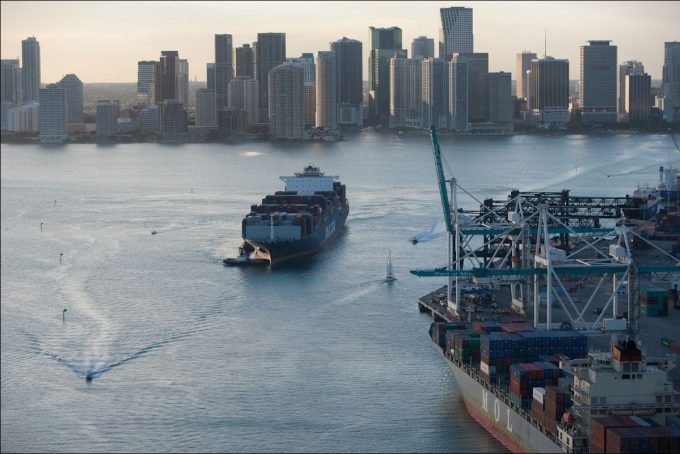 According to the latest monthly Global Port Tracker (GPT) report, US imports are expected to show a 7% jump in 2017 over the previous year, to reach 20.1m teu, on the back of a “strong year” for retailers.

The report, published by the National Retail Federation (NRF) and Hackett Associates, said the major US ports handled 1.74m teu in November, up 5.8% on the same month a year ago, and December is estimated to be ahead by 2.6% at 1.6m teu, concluding a “strong holiday season”.

August was the star performer, setting an all-time US monthly import throughput record of 1.8m teu at the 12 ports covered by the data.

Moreover, 2017 was notable for including five months, of only seven on record, when imports reached 1.7m or higher.

Describing the numbers as “no minor achievement at a time when many are trying to talk down the economy”, Ben Hackett, founder of Hackett Associates, said: “On a percentage basis, 2017 was one of the strongest increases we’ve seen since the end of the great recession.”

Mr Hackett said he expected the growth rate would “slow down some”, but added that, based on ongoing high consumer confidence, its forecasting models “show continued growth in the coming year”.

The numbers for February and March would be distorted due to the differing timings of Chinese New Year.

Meanwhile, the June 2016 expansion of the Panama Canal, enabling ships of up to 14,000 teu to transit the waterway, has boosted Asian imports for the US east coast and Gulf ports.

For example, the port authority at Houston said its 2017 import numbers were expected to be up 14% on the previous year at 2.4m teu.

Nevertheless, despite the healthy demand growth in US imports, ocean carriers failed to convert this into revenue due to a lack of rate discipline. Indeed, spot container rates from Asia tumbled for both US west coast and east ports during the year, losing around a third of their value.

And but for a strong surge in the last week of 2017, the year-on-year decline would have been worse.