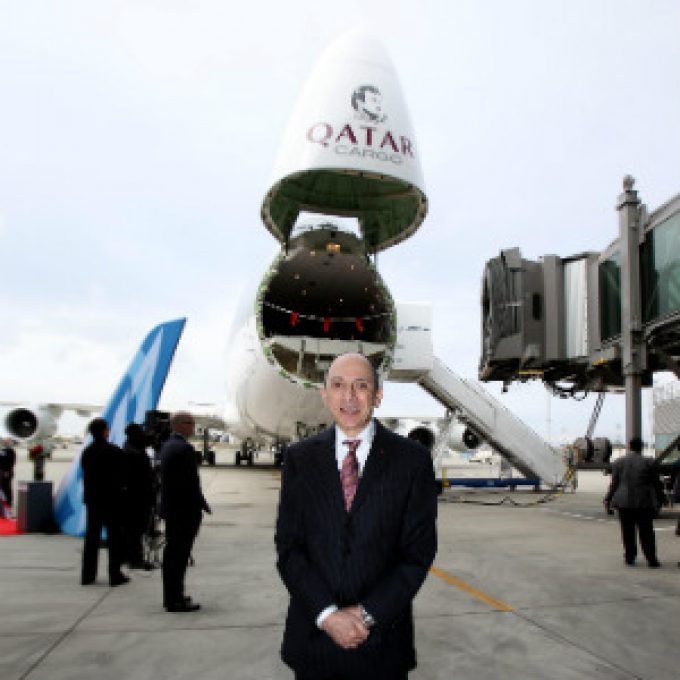 Qatar Airways Cargo has changed its tune after two years ago, saying 747-8Fs were  “too risky, too expensive, [with] too much capacity”.

“We are very cost-conscious,” the carrier argued, justifying only a short-term wet lease of the aircraft type.

However, yesterday the Gulf carrier ordered two 747-8Fs and received one, citing a strong market, boosted by a demand surge since neighbouring countries began their blockade of the tiny state.

At a ceremony in Seattle yesterday, CEO Akbar Al Baker (pictured) also touted a desire for Qatar to become the top cargo carrier.

“I’m sure you know I don’t like to be number two or number three,” he said.

Just two years ago, he told The Loadstar: “Being number one doesn’t mean you will be the most efficient, with the best service. The quality of our product delivery will surpass numbers one and two. Ranking by size is not important to us.”

But things have changed in recent months. Air cargo volumes this year have soared – growth is in the double digits; global freight tonne km were at 11.4% growth, year-on-year, in July.

Carriers have become confident, raising rates in some form or another. (One, which has raised its fuel surcharges twice this month already via its complex fuel mechanism, has been accused of “taking the mickey” by one forwarder.)

It’s not just a globally strong market which has led Qatar to change its mind about the “too risky” 747-8F. The blockade, primarily by Saudi Arabia and the UAE, and in place since June, has seen Qatar Airways’ cargo business grow by 160%, according to Mr Al Baker. It is bringing in fresh produce, cows and other imports which had previously travelled overland or by sea.

And even if the blockade ends, the healthy air cargo market could give the carrier cause for optimism.

It is unclear as yet whether it will return the wet-leased 747-8F it already has. But Mr Al Baker did hint at another order for a 747-8F. The airline also ordered four more 777s.

The blockade, which has left the airline with unexpected capacity, appears to have forced it to open routes perhaps more quickly than it otherwise would have done.

It recently announced a twice-a-week freighter flight to Pittsburgh, via Doha-Luxembourg-Atlanta. And it completed its first charter flight, with 100 tonnes of L Brands garments  for customer Expo Freight, from Colombo to Rickenbacker International Airport in Colombus, Ohio.

With additional freighter capacity, it will come as little surprise if more routes aren’t forthcoming soon.