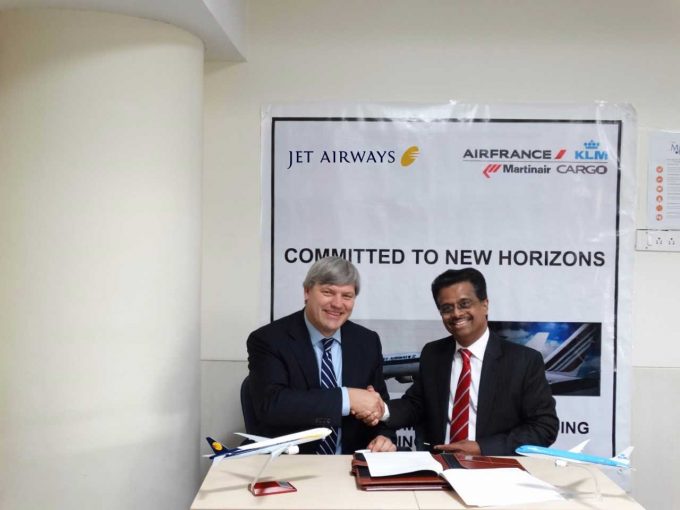 Jet Airways Cargo and Air France-KLM Cargo have signed an MoU to deepen their partnership, after successful cooperation on the passenger side led to a tripling of the combined cargo handled.

By extending the agreement to cargo, the airlines hope to leverage their route networks to offer “expanded high-value cargo services, as well as new and innovative products tailored towards specific industries, such as pharmaceuticals, express and e-commerce, aside from individual clients”.

Jet said its relationship with shareholder Etihad, which has a 24% stake, would not be “disturbed”.

The latest agreement, reportedly ‘metal-neutral’, deepens a cooperation started in 2014. It is expected to boost connectivity between India and Europe, as well as between Europe and North America via a similar relationship with Delta.

One source close to the carrier told The Loadstar: “No doubt AF-KLM sees it as a bonus, as it was always difficult to  make money in India, as British Airways took the best traffic.”

Cargolux and Nippon Cargo Airlines (NCA) also believe in strong partnerships as the key to success in freight.

Just a month after Cargolux started code-sharing with Emirates, it will now share capacity with NCA through code-sharing and space swap agreements, with Cargolux able to access Frankfurt-Tokyo flights and NCA able to use Luxembourg-Tokyo flights.

The move will see a minor shake-up in Cargolux’s service: Cargolux Italia will end its Narita operations, but will continue to fly to Osaka once the codeshare starts next summer.

NCA, meanwhile, is in partnership with Atlas Air, leading one commentator to suggest: “It seems the board of NCA has decided that it is better to focus on partners, with Cargolux operating in Europe and Atlas in the Americas.  I think it wants to cut some of the costs it has.”

A statement by the airlines added: “Both airlines consider the agreement as a first step towards a potentially deeper cooperation.”

The carrier told local media last week that it expected its results for the year to be $100m better than the loss originally forecast. It also plans to hire 60 new pilots next year and is considering increasing its 747 fleet with used aircraft.