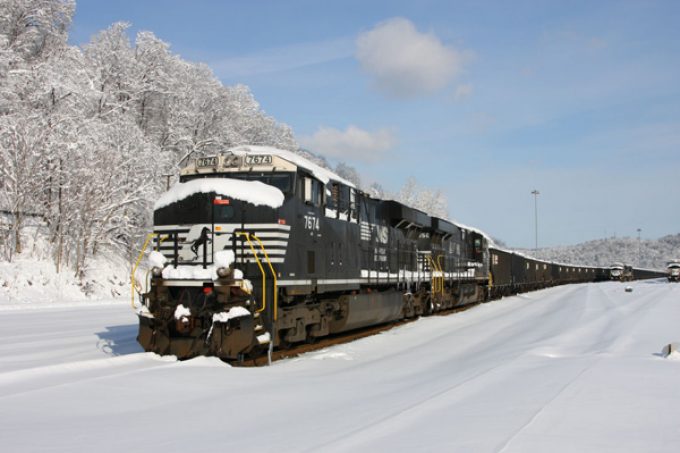 More haulage capacity opened up, pushing full-year revenues at intermodal operators down across the board.

Union Pacific (UP) experienced the biggest dent in its intermodal revenues, which tumbled 9% year-on-year. At Canadian Pacific (CPR) and Kansas City Southern (KCS), the declines exceeded 5%; while CN, CSX and NS declines were more muted, at around 1%.

A UP spokesperson declined to provide any further explanation than that offered by chief marketing officer Beth Whitehead at the company’s full-year results. She said total intermodal volumes would have been up 2% instead of down 6% were it not for the collapse of Hanjin.

“But we are well on our way to recovering the volumes with other shipping lines, especially with the DP World terminal expansion [in Prince Rupert] coming in July and the reshaping of the world’s shipping alliances,” he said.

While not openly admitting the impact of trucking on its results in 2016, Ms Whitehead said UP expected to benefit from tightening truck capacity this year, a view echoed by her opposite number at NS, Alan Shaw, where a modest upturn in volumes did little to prevent declining revenues.

“We expect intermodal volumes and revenue per unit in 2017 to benefit from tightening capacity within the trucking market, particularly, later in the year,” said Mr Shaw.

Increasing revenue per unit did little to salvage CSX’s year, with both revenues and volumes down 1% year-on-year in stark contrast to average annual growth of 7% over the last decade. A spokesperson told The Loadstar that a cycle of international account loss had been partly responsible.

According to DAT, which supplies trucking volumes and rates data, volumes carried by road hauliers in the US increased for the sixth straight month in December, up 8% on November and almost back to a June-high. Rates also edged up 1% compared with December 2015.

Data from the American Trucking Association depicted a year of yo-yo fortunes for road hauliers – although it was a year in which volumes closed 2.5% up compared with 2015, despite a depressed end-of-year performance with December volumes marginally down 0.7% on 2015.

“Looking ahead, there are some positive signs for truck tonnage, including the continued spending by consumers, larger wage gains and solid home construction,” he added.

President and chief commercial officer of CP Keith Creel said the company would be further focusing its efforts on taking back the trucking sector’s share of the intermodal market.

“I am talking about competing with truck share and taking trucks off the road and putting them on the rail,” said Mr Creel.

Similarly, CSX expects a strong demand for its intermodal product long-term, and will focus on its highway-to-rail conversion scheme this year, which aims to tempt shippers away from trucks to rail.

“The addressable market for highway-to-rail conversions remains about 9m truckloads in the eastern US,” the spokesperson told The Loadstar.

“Longer term, we expect domestic intermodal growth in the 5-10% range, and on the international side, we are experiencing growth with several customers.”